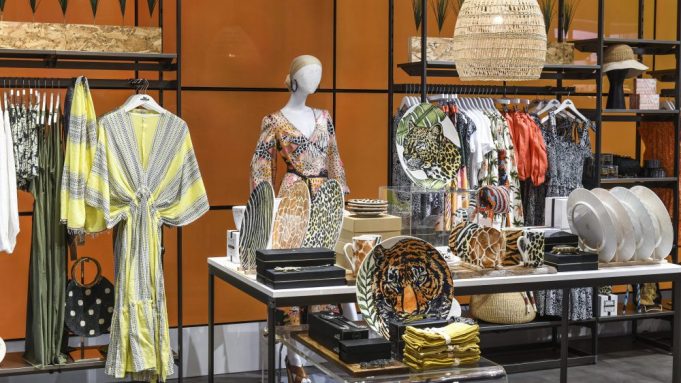 Does Nala wear lipstick? Probably not, but “The Lion King” fans can celebrate the release of the live-action remake with a new line of makeup that’s themed to Disney’s latest redo. For about $40, the Can’t Wait to Be Queen eyeshadow palette by Luminess Cosmetics includes shades named after the Nala, Mufasa and the film’s setting (“Pride Rock”).

Merchandising is a key component of any Disney release, though the studio saw a decrease in consumer products sales in 2018 following a lack of overall interest in movie merchandise for 2017 films “Star Wars” and “Cars.” But Karina Masolova, executive editor of the Licensing Letter, thinks revenue from merchandising is likely to bounce back in 2019 due to recent box-office titans such as “Toy Story 4,” “Aladdin” and “Avengers: Endgame.”

And then there is “The Lion King,” which rules the licensing world in addition to the jungle. The 1994 Disney animated film, which made an estimated $1 billion worldwide from retail sales, dominated toy stores in the ’90s with Simba (and his friends) plushies, lunch boxes and video games. “For a single movie that didn’t become a franchise, by most measures, it was the biggest ever” for consumer sales, said Marty Brochstein, the senior VP of Licensing International. “It was historic in many respects.”

“The Lion King” also spawned one of the most successful Broadway adaptations in history, with more than $8 billion in ticket sales, raising several generations of kids to the tune of “I Just Can’t Wait to Be King.”

As a result of universal nostalgia for the original film, merchandise tied to the reboot of “The Lion King” runs the gamut from the usual toys to high-end items including expensive artwork, pricey diaper bags and collaborations from handbags by Danielle Nicole to headbands by Gigi Burris. Actress Florence Kasumba guest curated a collaboration between Disney and Bloomingdale’s stores in Manhattan, Century City and San Francisco, hosting pop-up shops in select locations until Sept. 2 that include themed home decor, clothing and African-sourced goods.

“Product for the film has strong retailer support and we’re seeing great excitement and momentum, with mass and specialty stores supporting items across a variety of categories including plush, collectibles, apparel, accessories, publishing and beauty,” said Josh Silverman, executive VP of global product commercialization for Disney Parks, Experiences and Products.

The latest crop of “Lion King” gear is also targeted to adults who grew up on the original film, not just children.

“I think you’re gonna have ‘Lion King’ parents bringing their kids to the movie,” says Richard Gottlieb, CEO and founder of Global Toy Experts. “And what I mean by ‘Lion King’ parents, it’s been 25 years, so if you were anywhere from five to 10 years old when that movie came out, you’re 30 to 35 years old and you’ve got kids. And so, I think the driver for this movie isn’t going to be kids, it’s going to be parents bringing kids, which is probably another reason why they’re focusing on adult branding.”

In addition to wearing the new “Lion King” paraphernalia, you can also hang it on your walls. Die-hard fans can splurge on a mosaic portrait of “Scar” by artist Tom Matousak retailing for nearly $300, or the “Father and Son” piece with Mufasa and Simba by artist Michelle St. Laurent for $750, both available on Disney’s website.

“The original 1994 animated feature film has consistently remained one of our top-requested Disney themes,” says Allison Fillmore, the national sales director of Barker Animation Art Galleries, which specializes in collector’s portraits from other popular Disney films ranging from “Frozen” to “Maleficent.” She credits the “Lion King’s” themes of family, love and loyalty for driving demand for art associated with the film.

“Signature characters [like Disney princesses and ‘Winnie the Pooh’] will always remain our most popular,” Fillmore says. “However, the original 1994 release of ‘The Lion King’ set the bar quite high. And no other Walt Disney Animation Studio release had since reached this level of icon status until ‘Frozen’ debuted in 2013.”

Over on Amazon, one of the best-selling “Lion King” products for kids wins points for realism. Forget about Tickle Me Elmo. Little children can cuddle with a Pumbaa the warthog toy that eats bugs, burps and farts at the press of a button. The Simba and Nala editions are better behaved. When you push their heads together, they snuggle, feeling the love tonight.

Twenty five years ago, as “The Lion King” soared at the box office, its merchandising crushed a live-action remake of “The Flintstones” and a re-release of “The Jungle Book.” This year, some experts are already predicting that the live-action “Lion King” will sell as many products as the first film by year-end. “I wouldn’t be surprised if it breaks $1 billion in licensed retail sales,” Masolova says. “It might be more.”