‘The Kitchen’: Why Audiences Rejected a Serious Melissa McCarthy and Tiffany Haddish Movie 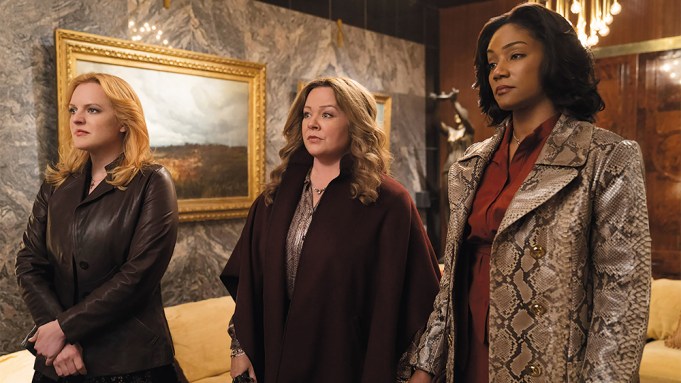 “The Kitchen” couldn’t take the heat.

Burned by negative reviews and pitched competition, Warner Bros. and New Line’s heist thriller — starring Melissa McCarthy, Tiffany Haddish and Elisabeth Moss — opened with a dismal $5.5 million when it debuted in 2,765 theaters. The people who did venture out to see the film this weekend weren’t all that enthused, giving it a mediocre B- CinemaScore, signaling that word-of-mouth might not bode well for “The Kitchen” in weeks to come.

“Warner Bros. knew this was going to be a tough sell, as they didn’t support ‘The Kitchen’ like a big summer blockbuster from the get-go,” said Jeff Bock, a box office analyst with Exhibitor Relations. “Case in point, they have ‘Blinded By the Light’ opening this weekend, just a week after ‘The Kitchen.’ Studios usually don’t run films on a conveyor belt unless they’re trying to move it in and out of the public eye as quickly as possible.”

“The Kitchen,” with a price tag around $38 million, represents yet another mid-budget movie that has struggled to punch up against blockbusters that continue to dominate multiplexes. It’s becoming tougher for studios to sell audiences on anything that feels like it could be seen on Netflix. The R-rated movie, which debuted against four other nationwide releases, also faced headwinds from Quentin Tarantino’s “Once Upon a Time in Hollywood,” which is still drawing adults to theaters. However, modest production and marketing fees do help limit any potential damage for the studio.

“I’ve been doing this for a very long time, and I’ve never seen a gap between the movies that work and the movies that don’t,” said Jeff Goldstein, Warner Bros.’ president of domestic distribution. “It’s a cautionary time for us as we greenlight movies.”

He adds, “In the case of this story, we took bold choices that didn’t pan out for us.”

Some of those bold choices include casting. Critics praised the leading ladies, but having the comedic powerhouses like McCarthy and Haddish play against type by taking on serious roles proved to be a lot to ask of audiences, who were still expecting something lighter from the two funnywomen. The movie marks a career low for both Haddish and McCarthy, which is saying something considering the latter starred in last year’s puppets-gone-wild trainwreck “Happytime Murders.” “The Kitchen” was criticized for a jumbled plot that fell back on mobster cliches.

“I think audiences are accustomed to seeing comedic actors play it straight, however that doesn’t mean those efforts have necessarily been successful at the box office,” Bock said. “Whenever there are a handful of new releases over any given weekend, there are bound to be box office casualties.”

It also bore a striking resemblance to the plot of “Widows,” Fox’s gritty female-fronted mob drama. Perhaps it should have been a red flag that despite solid reviews and a starry cast, “Widows” failed to break out at the box office and ended its run with $76 million globally off a $42 million budget. In the words of Variety’s chief film critic Owen Gleiberman, “The Kitchen” was “just like ‘Widows,’ except not as good.”

“The similarity to ‘Widows’ was certainly a drawback,” Bock said, adding, “All the gun violence issues in the media may have also played a part. Escapism is an essential draw for audiences, and it’s possible this hit just too close to home.”