Should ‘The Irishman’ Have Been a TV Series? Scorsese Says No 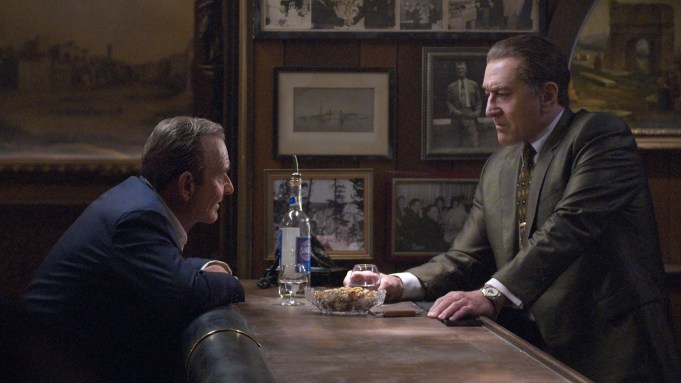 It might be tempting to watch Netflix’s “The Irishman,” which clocks in at three and a half hours, as a limited series over the course of a few evenings.

But director Martin Scorsese told Entertainment Weekly that he doesn’t agree a limited series could have worked as a different way to present the critically acclaimed feature-length film. The gangster epic hit Netflix Wednesday and is playing in selected theaters.

“You could say, ‘This is a long story, you can play it out over two seasons’ — I saw somebody mention that,” the director told EW. “Absolutely no. I’ve never even thought of it. Because the point of this picture is the accumulation of detail.”

“A series is great, it’s wonderful, you can develop character and plot lines and worlds are recreated. But this wasn’t right for that,” said Scorsese, an executive producer and co-creator of the HBO series “Vinyl.”

According to Scorsese, it’s important to watch the film’s final portion, during which Robert De Niro as Frank Sheeran experiences the fall out of his life’s relationships, in a way that’s cumulative, not episodic.

Journalist Alexander Denerfors was met with quite a backlash when he recently tweeted a suggestion on how to watch “The Irishman” as a limited series.

I created a viewing guide for everyone who thinks THE IRISHMAN is too damn long for one night. You're welcome! #scorsese #netflix #theirishman pic.twitter.com/sH06AxJ7he

It’s also unlikely any limited series would have been produced with the $175 million budget of “The Irishman,” which required a substantial investment to pull off the de-aging technology that allowed De Niro, Al Pacino and Joe Pesci to appear decades younger.

“We needed to make an expensive picture,” Scorsese told Variety. The Oscar winner for “The Departed” explained the ambitious scope of the film in an October interview, “The themes and the questions that have haunted and obsessed me throughout my life were all there. It gave Bob and me the opportunity to pick up the thread from our previous pictures and come together at a very different moment in our lives.”