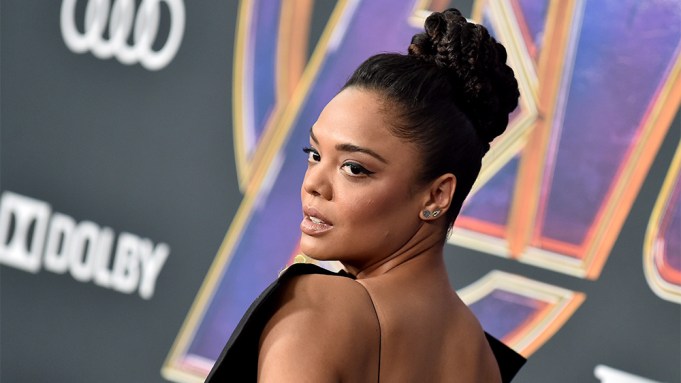 Tessa Thompson, who plays Valkyrie in the Marvel Cinematic Universe and upcoming “Avengers: Endgame,” had no problem addressing speculation about the character’s sexuality at the “Endgame” red carpet premiere Monday.

The “Sorry to Bother You” actress explained that she played her Marvel character as bisexual.

“In the canon, [Valkyrie] is bisexual. You see her with women and men, so that was my intention in playing her,” Thompson told Variety’s Marc Malkin at the Los Angeles Convention Center. “Obviously, at the forefront of most of these stories is not typically their romantic life. They have big stakes, like saving the world, so that tends to sort of trump.”

Speaking for Valkyrie, Thompson speculated that the character might not limit her post-world-saving spooning to just one Avenger.

“I hear on the Internet there’s been a lot of triangular conversations around Captain Marvel, Valkyrie, and Thor, and I think a communal spoon — just a spoon between friends that are hard-working would be a nice thing.”

But Thompson wasn’t opposed to a more-than-friends scenario either.

“It could be polyamorous, why not? A thruple,” she said. “With Thor in the baby spoon. It’s like there’s Valkyrie, Captain Marvel, and then whoever’s sort of holding him, is what I’m thinking.”

Thompson also offered her thoughts on “Captain Marvel,” which grossed over $1 billion and to date is the only female-led Marvel film.

“‘Captain Marvel’ just broke the ceiling off and dissipated myths about what women can do in these spaces and society,” she explained. “So it feels like we are really entering a new phase of Marvel. So this night is about celebrating more than just this film.”

The actress concluded, “[Stan Lee’s] vision is the idea: what makes you different is actually your superpower. And when we’re living inside of a robust time to be able to say to people that they can love who they want to love, they can be who they want to be. It’s perfect to include those narratives inside of this world.”