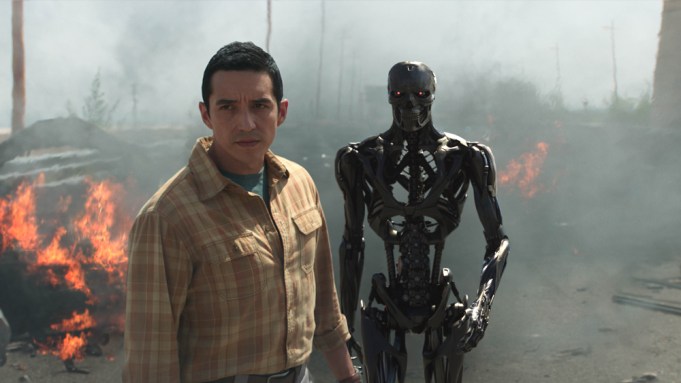 The stars of the Tim Miller-directed “Terminator: Dark Fate” stormed the stage of San Diego Comic-Con’s Hall H on Thursday, but it wasn’t until after the panel — which included appearances from Arnold Schwarzenegger and Linda Hamilton — that Natalia Reyes, Gabriel Luna and Diego Boneta reflected on what makes the upcoming installment in the series so exciting for them: representation of the Latinx community.

“This movie is a reflection of Hollywood now,” said Reyes, who takes on a lead role as Dani Ramos. “We are just changing these stereotypes and the ideas and the cliches of what a Latino should be.”

The film is partly set in Mexico City, so using Latinx performers just made sense, said Luna, who takes on the role of a new, liquid metal terminator sent back from the future to hunt down Dani.

“It’s wonderful. It’s really there for no other reason than it’s just reality,” the Mexican American actor told Variety. “[As a terminator,] I come back looking like someone who could be from Mexico City.”

Mexico City also happens to be where Diego Boneta — who plays Dani’s brother in the film — is from, an experience that he said allowed him to be an impromptu dialect coach on set. While the cast filmed in Spain, he said he helped actors speak Spanish with a Mexican accent.

Boneta added that he would often talk with Reyes, who is Colombian, about how much being billed with fellow Latinx actors meant to them. It was the first time the Mexican American actor was able to play someone of his heritage.

“Finally seeing a franchise like this having a Latinx cast, shooting in Mexico — that was probably the most special part of the movie for me. This was my first time playing Mexican,” said Boneta.