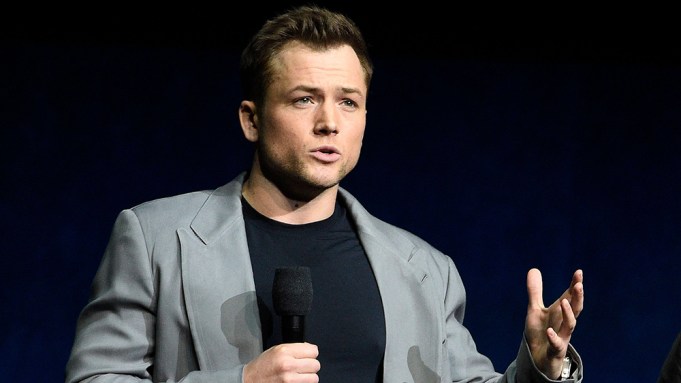 Taron Egerton, who will play Elton John in the forthcoming “Rocketman,” responded to claims that Paramount attempted to cut out a gay sex scene from the biopic.

“It’s nonsense,” Egerton told Variety‘s Marc Malkin when asked about the reports. “There is a love scene in the film. It’s been slightly blown out of proportion how extreme it is.”

Controversy ensued over the sex scene after the Daily Mail published an article in late March alleging that Paramount asked director Dexter Fletcher and producer Matthew Vaughn to cut out a sequence in the film that shows John sitting in bed naked alongside his lover and manager, John Reid, played by Richard Madden. Per the report, Paramount wanted to cut the sequence in order to sanitize the film and receive a PG-13 rating.

When addressing the controversy with Malkin at CinemaCon on Thursday, Fletcher said, “The real story is that I shot the love scene and like any scene, we go through the edit of the scene and we look at how it works best for what we’re trying to communicate. That’s down to me, that’s how I need to tell the story at that particular moment. You might see a little bit of butt, you might not. That remains to be seen.”

Whether it remains in the film or not, Egerton takes pride in his part in the love scene. “I think it’s a really beautiful bit of male intimacy,” Egerton said. “It’s one moment in a film that I believe is full of great moments.”

Fletcher is also proud of the scene, telling Malkin that “what’s important is you see two people having a moment, Elton’s first love. And that’s what needs to be approached responsibly and it’s a beautiful scene I’m very proud of.”

Fletcher also previously took to Twitter to respond to claims that Paramount was attempting to “straight-wash” the film. Shortly after the report was published, he wrote, “Seeing much speculation about ROCKETMAN!! That’s good! It’s still unfinished so it’s nothing but rumors. It has and always will be the no holds barred, musical fantasy that Paramount and producers passionately support and believe in. See for yourself May 24.”

The biopic, which follows the personal and professional journey of the iconic performer, will make its U.S debut on May 31.