Taron Egerton on Living With Elton John Before Filming ‘Rocketman’ 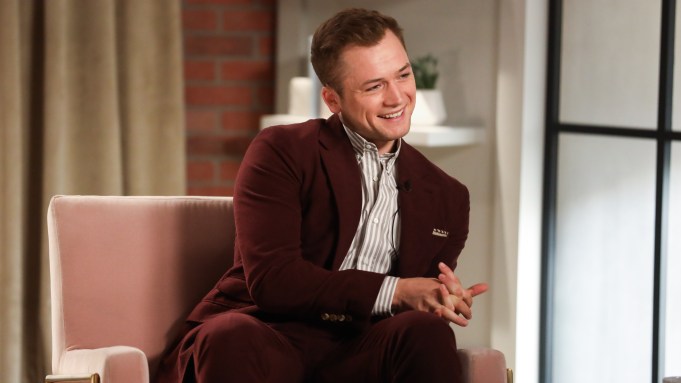 Taron Egerton spoke about the priceless present Elton John gave him when he moved into John’s home before filming “Rocketman.”

Egerton discussed his living situation with Awkwafina (“The Farewell”) during a conversation for “Variety Studio: Actors on Actors.”

“Before we started, [John] and [his husband, David Furnish], who produced the film, really allowed me into their life. I went and stayed with them,” Egerton said. “Elton gave me the first diamond earring he ever bought, which I wear in the film and all the therapy [scenes].

That kind of access to a musical legend wasn’t lost on Egerton.

“I’ve been really lucky,” he said. “It’s been a really weird experience of playing someone and getting to know them quite well.”

Earlier in the interview, Egerton explained the symbiotic relationship between John and long-term collaborator Bernie Taupin.

“Although [John] is a creative genius, he’s only able to do what he does with this lyricist, this poet, Bernie Taupin, who’s the other central figure in the film,” he said. “They’re two sides of a coin and it kind of creates the symbiotic relationship where they need each other, not only creatively but emotionally.”

Egerton also revealed that he chose to perform John’s classic hit “Your Song” for his drama school audition when he was 17.

Variety’s “Actors on Actors” issue is on newsstands everywhere now. The Emmy-nominated companion series will air on PBS stations and the World Channel starting in January.