The 11 Buzziest Movies at SXSW 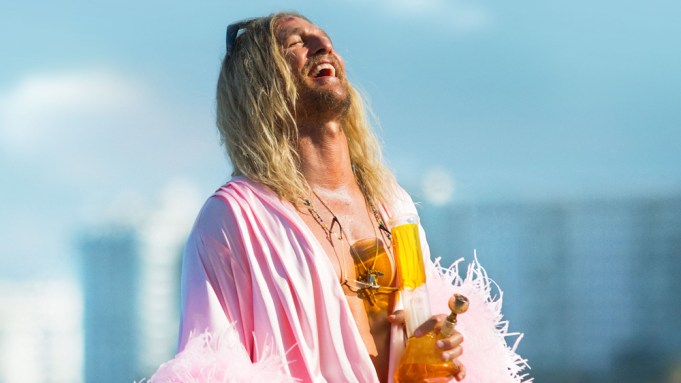 South by Southwest is that rare thing, a film festival that caters to both the art-house crowd and the masses. Just take last year’s gathering in Austin, Texas. It launched one of the biggest movies of 2018 with “A Quiet Place,” put Kay Cannon on the map as a director with “Blockers,” and discovered the indie gem “Thunder Road.”

In addition to all the barbecue and parties in downtown Austin, this year’s SXSW offers a promising-as-ever slate: including Jordan Peele’s next movie, Olivia Wilde’s directorial debut, and Charlize Theron as the next president of the United States. Speaking of politicians, both Alexandria Ocasio-Cortez (“Knock Down the House”) and Beto O’Rourke (“Running With Beto”) are subjects of documentaries playing at the festival. Here are the 11 buzziest films at SXSW 2019.

“Us”
Perhaps the most anticipated movie of this year’s SXSW is Peele’s latest feature after his Oscar-winning opus, “Get Out.” In “Us,” a married couple (played by Lupita Nyong’o and Winston Duke) realize they are on the worst vacation ever, when they are met by four strangers who look exactly like their family members. If “Us” succeeds, it will cement Peele as one of the most important filmmakers of his generation, who can pack the multiplexes with his high-brow touch.

“Long Shot”
Neither Theron nor Seth Rogen are strangers to SXSW. She came here two years ago with the underrated action movie “Atomic Blonde.” He owes Austin for championing his star-making role in “Knocked Up,” and since then he’s used the venue for the premieres of almost all of his biggest hits, such as “Neighbors,” “Sausage Party,” and “The Disaster Artist.” In “Long Shot,” Theron plays a secretary of state running for president who enlists Rogen, a journalist she used to babysit as a young boy, to work as her speechwriter. The trailer looks like “Miss Congeniality” meets “Veep.”

“Booksmart”
Wilde’s directorial debut centers on two studious high school girls (Kaitlyn Dever and Beanie Feldstein) who decide they need to cram in some partying before they graduate. The early buzz on the comedy is strong, much like last year’s “Blockers,” which also premiered at SXSW.

“The Beach Bum”
Harmony Korine’s first feature in seven years (since “Spring Breakers”) has long been rumored to be on the verge of release — there was talk that it might debut at last year’s Cannes. Now it’s finally here. Matthew McConaughey is a bongo-playing poet, who is having an existential crisis as he’s working on his next novel. If nothing else, the cast looks fun: from Snoop Dogg to Zac Efron and Isla Fisher.

“Kathy Griffin: A Hell of a Story”
After a controversial photo in 2017, in which she posed with a bloody facsimile of Donald Trump’s severed head, Kathy Griffin was blacklisted from Hollywood, lost Anderson Cooper as her friend, and underwent two lengthy federal investigations. But she wasn’t about to give up. She went on a redemptive tour, telling her story, called “Laugh Your Head Off,” which grossed $4.4 million. Griffin paid to have cameras shoot her last performance, which turned into her first concert movie.

“Running With Beto”
This documentary chronicles Democrat O’Rourke’s recent Texas Senate campaign to topple Ted Cruz, where he just came up short. Will this documentary be a hit much like the “Knock Down the House,” featuring New York congresswoman Ocasio-Cortez? That film, which premiered at Sundance and sold to Netflix, is also playing at SXSW and both political superstars are expected to be in attendance.

“I’m Just F*cking With You”
SXSW can be a launchpad for horror films, such as “The Cabin in the Woods” and “Drag Me to Hell.” Hulu is trotting out this horror-thriller as part of their “Into the Dark” genre series. “I’m Just,” starring Hayes MacArthur (“Bachelorette”), Jessica McNamee, and Keir O’Donnell, follows a brother and sister who pull into a roadside motel en route to a family wedding. The owner engages them in a series of pranks that increase with intensity and life-threatening danger as their stay rages on.

“Olympic Dreams”
This character study happens to be the first-ever film shot in the exclusive realm of Olympic village — the temporary residence for athletes competing in summer and winter Olympic games. Nick Kroll and Alexi Pappas (herself a former Olympic long-distance runner) play a volunteer dentist and an Olympian, respectively, who spend a brief but poignant period of time together after she fails to take the gold in her category. The film had a one-man crew in Jeremy Teicher, who shot the comedy on the ground in 2018 in PyeongChang. Plus, there’s a cameo from Gus Kenworthy.

“The Peanut Butter Falcon”
A roving adventure film, “Peanut Butter” follows a young man (Zack Gottsagen) with Down syndrome who escapes the retirement community where he lives and embarks on a journey to fulfill his dream of pro wrestling. On his path, he meets a star-studded cast, including Shia LaBeouf, Dakota Johnson, Bruce Dern, and John Hawkes.

“The Boy Band Con: The Lou Pearlman Story”
Music mogul Lou Pearlman was the kingmaker of ’90s pop craze, mounting the Backstreet Boys and NSYNC. He was also an indicted crook, who died in federal prison in 2016 from heart failure. NSYNC’s Lance Bass produces and stars in this documentary from director Aaron Kunkel, which lays out how Pearlman cheated his artists out of millions, billed a jet-setting lifestyle back to his bands and got away with it for decades. The doc features many faces familiar to the “TRL” generation, including AJ McLean, Chris Kirkpatrick, Ashley Parker Angel from O-Town, and Justin Timberlake’s mother Lynn Harless.

“Romantic Comedy”
Musician and writer Elizabeth Sankey is like many young women, whose perception of love and relationships has been formed by rom-coms. She is also reverent of their gatekeepers, stars we all know on a first-name basis: Sandra, Renée, Meg, and Julia. But her SXSW doc “Romantic Comedy” is a journey for truth behind a genre rife with toxicity and exclusion. The white, heterosexual norms perpetuated in these films teaches women they are not complete until marriage, and keeping a man happy and engaged is the only role a woman serves in a couple, Sankey argues. The film is told entirely through footage of classics like “My Best Friend’s Wedding,” “Two Weeks Notice,” “Pretty Woman,” “Never Been Kissed,” and “When Harry Met Sally.”