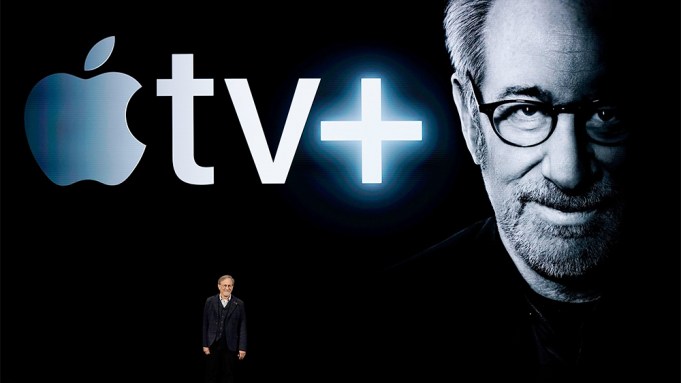 Many Hollywood heavyweights flocked to Apple’s Cupertino, Calif. headquarters to help reveal the tech giant’s revamped steaming service Apple TV+ on Monday — but one such legend was so polarizing he became a national trending topic on Twitter for simply showing his face.

Steven Spielberg was the first to appear in a dramatic short film about the power of creative content, cued up by Apple CEO Tim Cook and played at the top of a presentation of the many original series the company has ordered.

“You want my help with your opener?” rang out Spielberg’s voice over a black screen. He then art-directed the opening shot of the short, which featured testimony from the likes of J.J. Abrams, Octavia Spencer, Jennifer Aniston and Reese Witherspoon about what filmed content means to global audiences. Spielberg then took the main stage of the Steve Jobs Theater to discuss his Amblin Entertainment series “Amazing Stories,” ordered by Apple.

While the director received a standing ovation inside the theater, many industry watchers were shocked by his proximity to a streaming platform only weeks after appearing to lobby for considerable changes to Netflix’s eligibility for Academy Awards.

“Did we know Steven Spielberg was shilling for Apple during the kerfuffle with Netflix? Seems relevant!” asked BuzzFeed’s Kate Aurthur.

“I guess Spielberg has his streaming service of choice,” noted Franklin Leonard, founder of Hollywood script-ranker the Black List.

“If and when Spielberg brings a movie to Apple TV+, is he going to want it to be considered for Oscars?” asked another tech writer, while Vanity Fair’s Katey Rich called the appearance “a big old mixed message.”

Spielberg’s attendance is not as shocking as some might think. Amblin Entertainment is a full-service production company with interests in theatrical film as well as television (in the many forms it is increasingly taking). Spielberg has also never been shy about his love of emerging tech in storytelling, from the groundbreaking animation hybrid “The Adventures of Tin Tin” to the long-gestating “Ready Player One.”

What’s more interesting is that Apple has original movies currently sitting on its shelves — the animated “Wolfwalkers,” the nature documentary “The Elephant Queen” and a splashy Sundance acquisition “Hala,” about a modern Muslim teenage girl from executive producer Jada Pinkett Smith. Apple has not clarified whether it plans to take those films straight-to-service or support them with a theatrical release. At the time it was made, the “Wolfwalkers” deal was said to be designed to give Apple a contender for the Best Animated Oscar. If a film like “Wolfwalkers” didn’t get a wide theatrical release, that strategy would put it at odds with Spielberg’s idea of what films should win Hollywood’s top award.

“Steven Spielberg you messy bitch, I give it three years for this schmo is making movies for Apple,” tweeted Jenn Kaytin Robinson, the writer-director of the upcoming Netflix comedy “Someone Great.”

Did we know Steven Spielberg was shilling for Apple during the kerfuffle with Netflix? Seems relevant! #AppleEvent pic.twitter.com/Qnah8Nbq4Y

I guess Spielberg has his streaming service of choice. #AppleEvent

Steven Spielberg, who has openly argued that movies that are just on a TV aren't real movies and shouldn't be considered the same kind of art, is being paid to tell you why Apple TV+ is good.

The presence of “save movie theaters” Spielberg in all of this is a big old mixed message, no?

If and when Spielberg brings a movie to Apple TV+, is he going to want it to be considered for Oscars? #AppleEvent