Disturbance in the Force With Latest ‘Stars Wars’ Tease: Is Rey on the Dark Side? 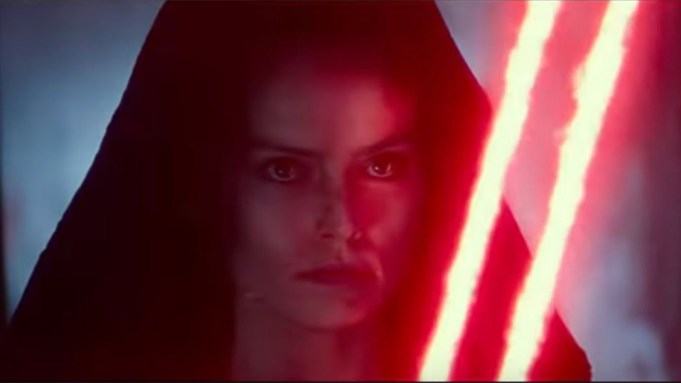 How “Star Wars: The Rise of Skywalker” will button up the final trilogy of the epic space saga is surely on the minds of many fans in the run-up to its release on Dec. 20.

But a revealing sizzle reel, shown at the Disney’s D23 Expo this past weekend, left fans feeling a disturbance in the force: Was that really Rey in a Sith-esque robe, holding a double-ended red lightsaber, thus heralding a turn to the dark side?

Star Daisy Ridley seemed to indicate as much — well, sort of. When asked if she got to work with a double-ended lightsaber, Ridley told Variety at the fan convention, “I did. Or did I?”

Playing with the complexities of good and evil has been something Ridley said she has relished as Rey, a role she has starred in since 2015’s “The Force Awakens.”

The D23 reel compiled footage from all of the Skywalker saga films, an odyssey told in three trilogies spanning over 40 years. It also teased the arrival of Rey and friends to the desert planet Pasaana and a lightsaber showdown between Adam Driver’s Kylo Ren and Rey.

The ninth installment will conclude this era of the canon, although more movies are headed to the big screen, in addition to ancillary content coming to Disney’s subscription streaming service Disney Plus, like the Jon Favreau-helmed live-action series “The Mandalorian.”

Anthony Daniels, known for his role as loyal droid C-3PO, is at least one star who looks forward to how those future stories will play out. Daniels is the only actor of the main cast to have been in all nine films, starting with “Star Wars: Episode IV – A New Hope” in 1977.

“It’s going to be exciting times,” said Daniels of the future of the franchise. “Maybe I will be in the audience going, ‘Well, I wonder what happens in this film.’”

Daniels joins returning cast members including Ridley, Driver, John Boyega, Oscar Isaac, Kelly Marie Tran, Joonas Suotamo and Billy Dee Williams, who will reprise his role as roguish space smuggler Lando Calrissian, a part he originated in “The Empire Strikes Back” in 1980. Newcomers to the Star Wars universe include Keri Russell as Zorri Bliss and Naomi Ackie as Jannah.

And writer/director J.J. Abrams said he could not finish the series without Princess (later General) Leia Organa. Carrie Fisher will also be featured in the film thanks to unused scenes from “The Force Awakens” that Abrams was able to repurpose for “The Rise of Skywalker.” Fisher passed away in 2016.

“The stories she would tell, her spirit, her sense of humor, which was like no one else’s, her free associative brilliance. I mean, she was just the greatest,” said Abrams of the late Fisher. “We knew there was no way to tell the end of the Skywalker saga without Leia. We knew we would not re-cast. We knew we would not use a CG character.”

And while it all might take place a long time ago in a galaxy far away, Abrams noted that in addition to the themes of fighting oppression and for freedom, the most cherished part of this final episode might be all the friends we’ve made along the way.

“My favorite thing about this one is it’s about a group of friends together on this adventure,” he said. “You get to see them on this crazy, thrilling adventure together and not split up. So, I’m really excited about that.”