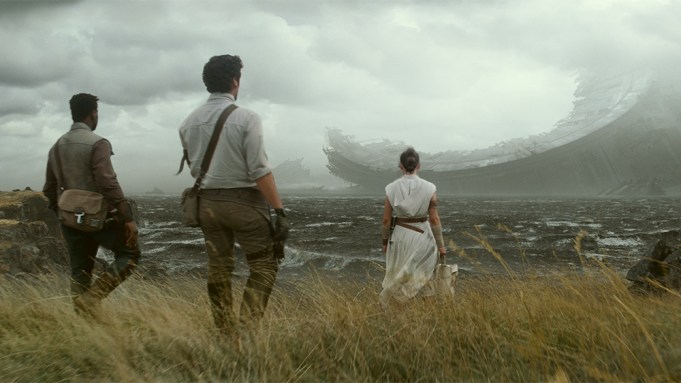 The end of the Skywalker Saga draws closer.

After debuting footage during D23’s Walt Disney Studios panel on Saturday, the general public has been treated to another look at “Star Wars: The Rise of Skywalker.” The new footage features Rey, Kylo Ren, Finn, Poe Dameron, Chewbacca, BB-8, C-3PO and Lando Calrissian in what could be their final outing.

The cast and director J.J. Abrams were on hand at D23 to present the latest look. There, Russell suggested she’s a former flame of Oscar Issac’s character Poe Dameron.

“She has a little bit of a checkered past and maybe some questionable morals, but really she’s an old friend of Poe’s. I think the entrance of Zorri is there to describe more of who he was in an intimate way and familiar way,” she told Variety.

The first trailer dropped back in April during the Star Wars Celebration in Chicago, where fans learned the title and got to see the “Episode IX” cast in person. Abrams had said “The Rise of Skywalker” will be about a “new generation, what they’ve inherited, the light and the dark” and that the characters will face off against “the greatest evil.” All signs point to a final showdown between Rey and Kylo Ren and possibly a re-emergence of Emperor Palpatine from the original trilogy.

The “Star Wars” universe had a strong showing at D23 this year. The Disney Plus presentation on Friday showed off the first trailer for Jon Favreau’s “The Mandalorian” starring Pedro Pascal, and Ewan McGregor made a brief on-stage appearance to tease details about the long-rumored solo Obi-Wan Kenobi series.