Sith Trooper Revealed From ‘Star Wars: The Rise of Skywalker’ 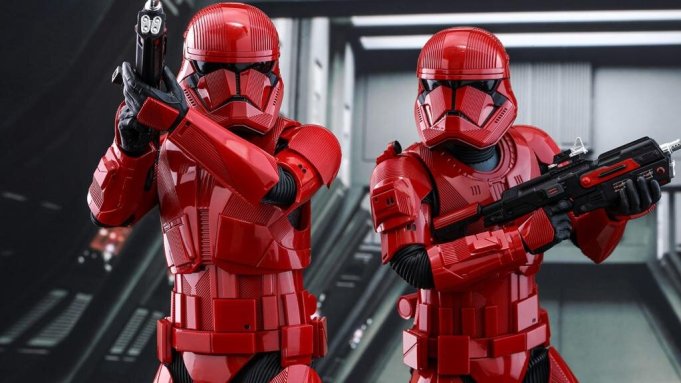 “Star Wars: The Rise of Skywalker” revealed a new storm trooper uniform Wednesday at San Diego Comic Con as part of a special exhibit celebrating the evolution of the storm trooper design.

Dubbed the Sith trooper, the new uniform sports all-red armor plates with a matching red and black blaster. Also decorating the armor is a slightly more textured pattern, although the overall design is reminiscent of past clone troopers from films such as “Attack of the Clones” and “Revenge of the Sith.”

Star Wars has also announced a toy version of the new character design, which hints at a host of new red and black weapons for the troopers.

However, the new design won’t be completely replacing the storm troopers of old. In the trailer for the latest “Star Wars” film, a storm trooper clad in the original white armor makes a brief appearance behind Kylo Ren.

Also joining the “Star Wars” sequel trilogy is Emperor Palpatine, after first appearing in “The Empire Strikes Back,” one of the original series’ films. “Star Wars: The Rise of Skywalker” is set to hit theaters Dec. 20, and is the third installment of the Star Wars sequel trilogy, following JJ Abrams’s “The Force Awakens” and “The Last Jedi.” It is also the final episode of the nine-part “Star Wars” saga.