‘Star Wars: Rise of Skywalker’ Reviews: What the Critics Are Saying 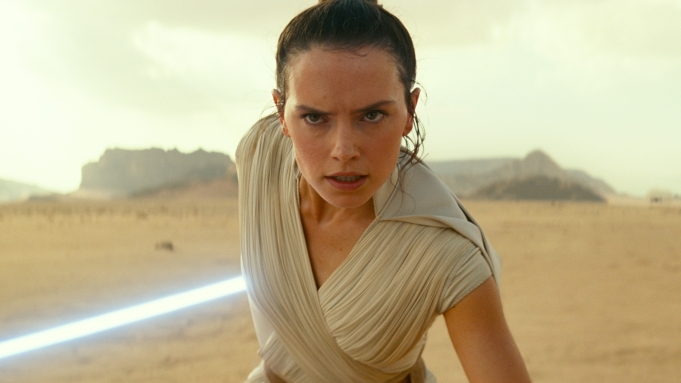 It might come as little surprise that “Star Wars: The Rise of Skywalker,” a culmination to the nine-chapter Skywalker saga, has garnered polarizing reviews.

The now four-decade-old franchise, as Los Angeles Times critic Justin Chang puts it, “launched to paradigm-shattering popularity.” “Star Wars” is a brand that has a fan-base with few equals, and ardent enthusiasts have been nothing if not vocal about the unwieldy direction of the sequel trilogy.

Critics chided director J.J. Abrams for playing it safe in landing a series that’s been 40 years in the making. Others noted the epic finale makes a concerted effort to service the fans.

“Star Wars: The Rise of Skywalker” serves as the third entry in the sequel trilogy behind 2015’s “The Force Awakens” and 2017’s “The Last Jedi.” The cast includes the late Carrie Fisher, Adam Driver, Daisy Ridley, John Boyega and Oscar Isaac.

Variety’s Owen Gleiberman offered one of the more positive reviews, saying, “No ‘Star Wars’ film can fully recapture the thrill of 40 years ago, but as directed by J.J. Abrams, the ninth and final chapter in the saga that George Lucas created may come closer than any “Star Wars” movie since.”

“Star Wars: Rise of Skywalker” debuts in theaters Dec. 20. Here’s what critics have to say about the epic conclusion:

“‘Star Wars: The Rise of Skywalker’ might just brush the bad-faith squabbling away. It’s the ninth and final chapter of the saga that Lucas started, and though it’s likely to be a record-shattering hit, I can’t predict for sure if ‘the fans’ will embrace it. (The very notion that ‘Star Wars’ fans are a definable demographic is, in a way, outmoded.) What I can say is that ‘The Rise of Skywalker’ is, to me, the most elegant, emotionally rounded, and gratifying ‘Star Wars’ adventure since the glory days of ‘Star Wars’ and ‘The Empire Strikes Back.’ (I mean that, but given the last eight films, the bar isn’t that high.)”

At least since “The Return of the Jedi” (1983), the point of each chapter has been consolidation rather than distinction. For a single film to risk being too interesting would be to imperil the long-term strategy of cultivating a multigenerational, multinational fandom. “The Rise of Skywalker” — Episode IX, in case you’ve lost count — is one of the best. (It opens Friday.) Also one of the worst. Perfectly middling. It all amounts to the same thing.”

“I suspect that more than a few fans who were incensed by ‘The Last Jedi’ and its refusal to pander to their every expectation will be grateful to see Abrams re-ensconced in the director’s chair. Even if you simply watch the movie and ignore some of the controversy-stirring pre-release chatter, ‘The Rise of Skywalker’ nakedly offers itself up in the spirit of a ‘Last Jedi’ corrective, a return to storytelling basics, a nearly 2½-hour compendium of everything that made you fall in love with ‘Star Wars’ in the first place.”

“The final film in this trilogy, ‘The Rise of Skywalker’ (out December 20), feels like such a desperate scramble to win back fans’ affection, to re-create that probably uncapturable sense of awe conjured up by the original series. The movie never rests, relentlessly ardent in its grasping for mythos.”

“He nails that 42-year-old recipe dutifully — effortfully, it must be said — but the flavoring’s off. The story doesn’t require him to toss in as many ingredients from earlier films in the saga as he does here, but he dumps them all (callbacks, references, echoes, events, characters) into the mix anyway. The result leaves you feeling not so much bloated — the film moves too quickly, and is too much fun for that — but certainly overstuffed.”

“It’s both glutted with plot points and embarrassingly cautious, precisely calculated to not to poke the hornet’s nest of detractors who popped up to voice their displeasure with ‘The Last Jedi,’ with some complaining about how hallowed characters developed while others voiced more overtly racist and sexist concerns. I can’t read minds, but I think this movie is likely to please those fans.

“The movie, the last in a new trilogy of Star Wars sequels produced without George Lucas’ involvement (or, it must be said, his acid-trip imagination), is so freighted with obligation that it almost groans under the weight, flashing a weak smile as it vaguely approximates the appearance of a zippy good time. Of course, most concluding chapters of a saga with a capital S carry burdens their predecessors don’t: They often end up feeling like the last act of a movie stretched to feature length—all falling action, no remaining mystery. But in the case of this ninth official episode, the batting-cleanup responsibilities are compounded by the expectations of a fanbase on the cusp of mutiny. ‘Skywalker ‘wants desperately to please them, a potentially impossible task it tackles with transparently ingratiating caution. This is a space opera animated not by joy but insecurity—the anxiety, evident in almost every moment, that if it’s not very careful, someone might feel letdown.”

“‘The Rise of Skywalker’ gives people what they go to Star Wars for, but that’s all it does—and worse, all it sets out to do. It’s frenzied, briefly infuriating, and eventually, grudgingly, satisfying, but it’s like being force-fed fandom: Your belly is filled, but there’s no pleasure in the meal. The movie feels like it’s part of the post–Last Jedi retrenchment, when Disney jerked the leash on Solo and killed plans for future spinoffs by insisting that filmmakers stick to the established playbook. It’s of a piece with the pointedly unambitious The Mandalorian, just good enough to get people’s attention but fundamentally terrified of rocking the boat. Rather than making a movie some people might love, Abrams tried to make a movie no one would hate, and as a result, you don’t feel much of anything at all.”

“‘The Rise of Skywalker’ is, for want of a better word, completely manic: It leaps from plot point to plot point, from location to location, with little regard for logic or mood. The script, credited to Abrams and Chris Terrio, tries to tie up every dangling thread from The Force Awakens, delving into the origins of the villainous First Order, Rey’s mysterious background as an orphan on the planet Jakku, and even Poe’s occupation before signing up for the noble Resistance. The answer to a lot of these questions involves the ultra-villainous Emperor Palpatine (Ian McDiarmid), the cackling, robed wizard-fascist behind the nefariousness of the first six films.

I wish I could tell you every answer is satisfying, and that Abrams weaves the competing story interests of nine very different movies into one grand narrative, but he doesn’t even come close.”

“‘Star Wars: The Rise of Skywalker’ is a jam-packed tribute to George Lucas’ legacy and the millions of dedicated fans who’ve kept the franchise alive and well for decades. And while it lacks the more cohesive, streamlined storylines of its predecessors ‘The Force Awakens’ (2015) and ‘The Last Jedi’ (2017), ‘Skywalker’ is buoyed by always-dazzling visuals, satisfying emotional beats and solid performances.”