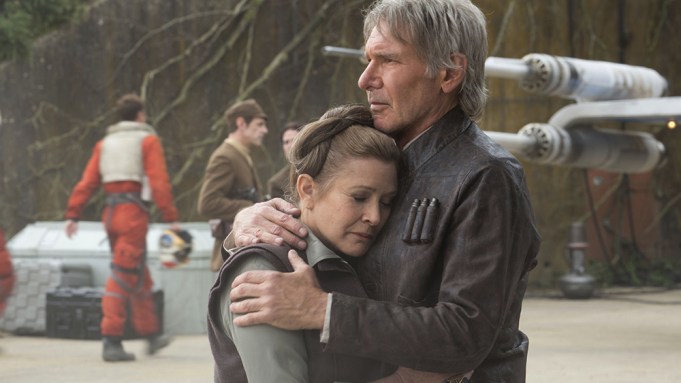 It appears Carrie Fisher knew that J.J. Abrams would direct another “Star Wars” film even before he did.

While stopping by “The Late Show With Stephen Colbert” to discuss the upcoming “Star Wars: The Rise of Skywalker,” Abrams shared an uncanny message he got from the late Fisher, whom he first worked with in 2015 on “Star Wars: The Force Awakens.”

Fisher died in 2016, before filming on “The Rise of Skywalker” began and prior to the news that Abrams would return to complete the Skywalker saga. But the actress, who appears in the upcoming film through unused footage from “The Last Jedi,” apparently knew she would work with Abrams again.

“I wasn’t supposed to work on this film, and she passed away before ‘The Last Jedi’ was released,” Abrams said. “She wrote this autobiography, ‘The Princess Diarist.’ She thanks me at the very end and says, ‘Special thanks to J.J. Abrams for putting up with me twice.’ I had never worked with her before ‘Force Awakens’ and I wasn’t suppose to direct Episode IX. It was a very Carrie thing to write something like that and to somehow know. It was really strange.”

Abrams said it would have been “impossible” to conclude the “Star Wars” sequel trilogy without Fisher’s Princess Leia.

“We knew that there was no way that we could finish this Skywalker saga without Leia,” he said. “We knew we’d never want to do a digital Leia and, of course, couldn’t recast it. I still can’t quite believe that she’s gone, because we’ve been working on these scenes in editorial and she’s as there as anyone. It’s really uncanny.”

“Star Wars: The Rise of Skywalker” debuts in theaters Dec. 20.