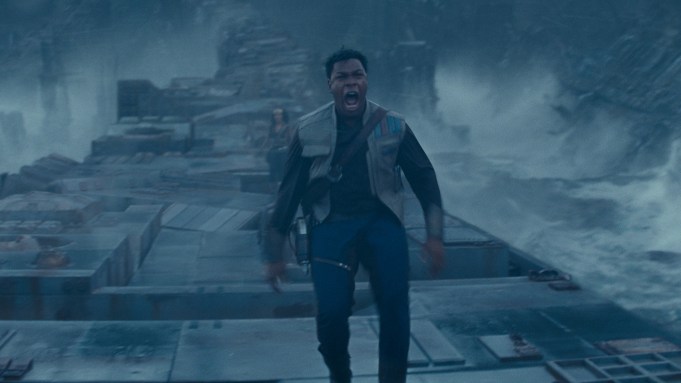 “Star Wars: The Rise of Skywalker” dominated the box office during Christmas, collecting $32 million on Wednesday.

That bounty marks the second-best Christmas Day showing behind 2015’s “The Force Awakens” ($49 million). J.J. Abrams’ conclusion to the nine-chapter Skywalker saga could earn another $150 million to $155 million through Sunday. “The Rise of Skywalker” has hauled $516.8 million to date, crossing the $500 million mark within eight days.

It was a merry Christmas for more than just inhabitants of a galaxy far, far away. A handful of new movies opened, hoping to provide a final box office jolt before the new year.

Greta Gerwig’s “Little Women” led the way for fresh offerings, placing third on box office charts and generating $6.42 million on opening day. Sony and New Regency’s adaptation of the literary classic is on track to gross a strong $22.5 million during its first five days in theaters. The $40 million film — starring Saoirse Ronan, Emma Watson, Timothee Chalamet, Laura Dern and Meryl Streep — follows the March sisters as they come of age in America after the Civil War.

Another Christmas Day release, A24’s “Uncut Gems,” nabbed fourth place with a solid $5.9 million, the biggest opening day in the studio’s history. The suspense thriller, directed by Josh and Benny Safdie and starring Adam Sandler, made $1.15 million on Christmas Eve. It’s expected to bring in a sizable $16.5 million over the extended holiday frame.

Disney-Fox’s “Spies in Disguise” launched at No. 5, pocketing $5 million on Wednesday. The family-friendly animated film should finish the weekend with $26 million. Will Smith and Tom Holland lent their voices to the comedy, set in the world of international espionage.

Sony’s “Jumanji: The Next Level” secured second, picking up $12.5 million on Christmas Day. The Dwayne Johnson and Kevin Hart-led action sequel looks to amass a huge $60 million through Sunday, which would lift domestic ticket sales to $176 million.

As awards season kicks into high degree, a number of films are launching at the specialty box office.

DreamWorks and Universal’s “1917,” a war epic directed by Sam Mendes, scored $251,262 from 11 theaters in Los Angeles, New York, San Francisco and Chicago. Though it’s tricky to predict box office fortunes for a limited release, “1917” could make $600,000 over the traditional weekend and $975,000 for the five-day outing. The action drama follows two young British soldiers (George MacKay and Dean-Charles Chapman) tasked with the dangerous mission of delivering a message that could save hundreds of lives. It debuts nationwide on Jan. 10.