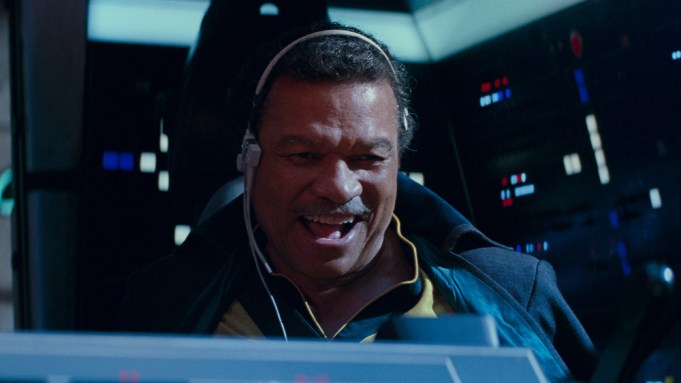 The gambler, playboy and original owner of the Millennium Falcon, Lando Calrissian, is back.

Billy Dee Williams took the stage at Star Wars Celebration in Chicago on Friday, showing fans the first look at Lando in “Star Wars: The Rise of Skywalker.”

First look of Billy Dee Williams back in his Lando Calrissian cape for #EpisodeIX revealed at #StarWarsCelebration. “How did I find Lando again? Lando never left me!” https://t.co/Odfoxf635j pic.twitter.com/tnhcSCYTec

It’s been 36 years since Lando last graced the screen in “Return of the Jedi,” and fans have been wondering where he’s been since J.J. Abrams began his modern trilogy in 2015. When asked what it was like playing the character again after so much time had passed, Williams remarked that it was easy.

“How did I find Lando again? Lando never left me!” he said.

Williams is one of the last original actors whose character is still alive in the franchise. Considered one of the main characters, along with Luke Skywalker, Han Solo and Leia Organa, only Carrie Fisher’s Leia is still alive for “The Rise of Skywalker.” Donald Glover took over for a brief stint in “Solo: A Star Wars Story” last year, showing Lando’s origin and how he met Han.

Abrams added several new cast members to “Episode IX,” including Naomi Ackie, who was revealed to play the mysterious Jannah. At the panel, host Stephen Colbert grilled Ackie on if she plays Lando’s daughter, but she danced around the question, saying the notorious playboy could have children all around the galaxy.