Continue to Variety SKIP AD
You will be redirected back to your article in seconds
Dec 20, 2019 10:20am PT

By
Adam B. Vary, Brent Lang 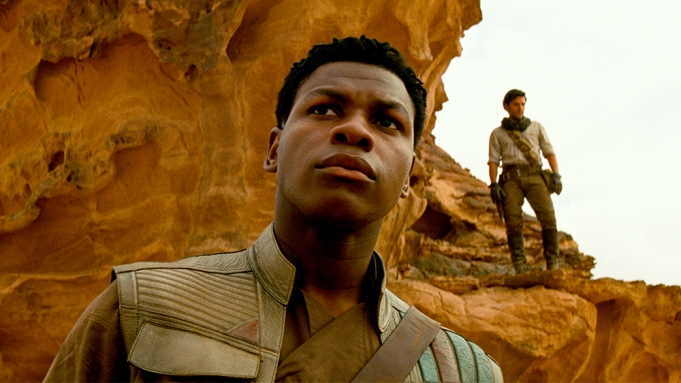 As the concluding chapter in the nine-film, 42-year-old Skywalker saga, “Star Wars: The Rise of Skywalker” was always destined to make cinema history at just about the biggest scale imaginable. But it turns out that the movie, written by J.J. Abrams and Chris Terrio and directed by Abrams, makes film history in just about the smallest way possible, as well. (Warning: The following paragraph contains a spoiler for the end of “The Rise of Skywalker.”)

In the final minutes of the movie, Commander D’Acy (Amanda Lawrence), a minor supporting character who first appeared in 2017’s “Star Wars: The Last Jedi,” walks up to another woman in the Resistance and kisses her on the lips. The moment marks the first same-sex kiss ever in a “Star Wars” movie, and a rare example of any kind of romantic same-sex affection expressed in a global tentpole.

It is also just that: a moment, only seconds long, with zero impact on the story and featuring characters who barely register within the vast tapestry of the “Star Wars” creative galaxy.

When Abrams first signed on to co-write and direct 2015’s “Star Wars: The Force Awakens,” he deliberately sought to cast actors who “looked more the way the world looks than not,” as the filmmaker put it to Variety in early December. Both Abrams and “The Last Jedi” director Rian Johnson lived up to that aspiration, casting multiple people of color in prominent roles — including John Boyega’s Finn and Kelly Marie Tran’s Rose Tico — and significantly increasing the number of women on screen who drive the story, first among them Daisy Ridley’s Rey.

In the same vein, Abrams said that “in the case of the LGBTQ community, it was important to me that people who go to see this movie feel that they’re being represented in the film.” Technically, there is unambiguous LBGTQ representation in “The Rise of Skywalker,” but neither Abrams nor Johnson ever wrote a prominent LGBTQ role into a “Star Wars” movie.

They are far from alone. While the television landscape has exploded over this decade with LGBTQ characters, meaningful queer representation has remained conspicuously absent from Hollywood’s biggest movies. Only 13 of the LGBTQ-inclusive films released by the major studios in 2018 passed the Vito Russo test, the barometer created by LGBTQ advocacy organization GLAAD to measure consequential queer representation in film (similar to the Bechdel test for female movie characters). Of those 13 movies, only three — “Deadpool 2,” “Bohemian Rhapsody” and “Crazy Rich Asians” — were major tentpoles with a robust global release.

Disney has been particularly negligent with LGBTQ characters in its films. It was the only major studio in 2018 to have zero queer representation, according to GLAAD, and this year has scarcely been any better. “Avengers: Endgame” did contain an openly LGBTQ character — but once again, it was a minor figure, a civilian played by director Joe Russo, rather than one of Marvel’s legion of superheroes. “Toy Story 4,” meanwhile, contained a lesbian couple that appeared on screen so briefly that audiences could be forgiven for not noticing them at all.

And that is all Hollywood’s biggest movies seem to be able to offer by way of LGBTQ representation: the bare minimum. In 2018’s “Fantastic Beasts: The Crimes of Grindelwald,” Dumbledore (Jude Law) wordlessly pines for the title villain (played by Johnny Depp), but never overtly acknowledges his love. In 2017’s “Beauty and the Beast,” LeFou (Josh Gad) dances with a man for a brief moment at the very end of the movie. In 2016’s “Star Trek Beyond,” Sulu (John Cho) greets his (nameless, voiceless) husband with a friendly hug. That same year, the internet was abuzz after sharp-eyed viewers claimed that there was a lesbian couple pictured in a crowd scene of “Finding Dory.” The filmmakers would neither confirm nor deny that the two women in question were romantically involved.

So what is keeping the film industry from making the same strides with bringing queer characters to vivid life that it has recently made with putting more women and people of color front and center on screen?

The first culprit seems obvious: China. The country has grown this decade into the second-largest theatrical market in the world, but a limited quota of Hollywood productions are allowed to screen there each year, and all films must first be approved by government censors.

China has no formal rules specifically prohibiting content that features same-sex intimacy, but there is an informal understanding that censors will excise explicitly same-sex material, according to two former executives with extensive major studio and distribution experience. Historically, that has made studios wary of greenlighting films with LGBTQ characters. When these movies have been made, they have been often shot so that any sex scenes or kissing sequences can be edited out without making it difficult for audiences to follow the plot, according to one of the executives.

And indeed, movies like “Cloud Atlas” and “Bohemian Rhapsody” were forced to strip out all overt queer representation before getting approved for Chinese release. Other films with LGBTQ characters and overt expressions of same-sex affection and eroticism — like “Brokeback Mountain” and “Call Me by Your Name” — have been prevented from screening at all in the country.

An insider close to Disney denied that China had ever played a role in determining whether or not the studio will include gay characters in its films.

Regardless, the same-sex kiss in “The Rise of Skywalker” did make it into theaters in China. One executive believes that Chinese censors would have raised more objections if the kiss had been between two men, which might help explain why the characters of Finn (Boyega) and Poe (Oscar Isaac) remain platonic friends in the film despite widespread fan interest in them becoming a couple. In a recent interview with Variety, Isaac bemoaned that the palpable chemistry between him and Boyega from “The Force Awakens” wasn’t taken in a romantic dimension in “The Rise of Skywalker.”

“It seemed like a natural progression, but sadly enough it’s a time when people are too afraid, I think, of … I don’t know what,” he said.

Although another major foreign territory, Russia, has infamously passed anti-gay laws, LGBTQ content is taken more on a case-by-case basis, allowing some movies to enter the country without objection or alteration. The same-sex kiss in “The Rise of Skywalker” remained in Russian versions of the film, though it has been excised in the United Arab Emirates and other Middle Eastern markets.

It’s unclear, however, how far concerns about restricting LGBTQ characters for international distribution ultimately trickle down into the creative process. Screenwriters who have worked on several major tentpole movies for multiple studios say the notes they received concerning foreign tastes were more about writing roles for actors who have international appeal than anything regarding content.

Instead, these writers point to more homegrown factors that limit queer representation.

“We’re still battling the cultural assumption that characters are default white and default straight, and anything else has to be justified,” says one screenwriter. “Things have definitely gotten better with studios paying attention to racial and ethnic representation, but LGBTQ representation can sometimes hinge on ‘why does this character need to be gay in story terms?'”

Another screenwriter cited a recent sci-fi film in which initial script drafts had one supporting character casually refer to his boyfriend — but that reference was cut in the final draft, purely because it slowed down the story.

“In default blockbuster mode, there can be a war on specificity,” says this writer. “Anything that isn’t in direct service of the main characters usually gets sanded down.”

And, of course, time-honored American cultural conservatism plays a factor, too. Disney especially has to deal with potential boycotts from consumers with conservative religious beliefs, many of whom are part of Disney’s family-friendly customer base. After the gay moment in “Beauty and the Beast,” the company was threatened with boycotts at its theme parks. A similar protest erupted over the blink-and-you’ll-miss-them same-sex couple in “Toy Story 4.”

At the same time, however, executives at the studio have privately agitated for the company to include more LGBTQ characters, believing that Disney has a moral obligation to use its global platform to promote inclusion.

The first big test of that conviction will be Marvel Studios’ “The Eternals,” due to open November 2020, which will include a central gay character, a truly historic first for the Marvel Cinematic Universe. In some ways, it’s a safer bet for Marvel to take than Lucasfilm; while the latter has faced down harsh fan criticism at any serious deviation from the “Star Wars” status quo, the former has produced movies centered on female heroes and people of color to widespread success and rabid fan enthusiasm.

Until these characters are here and queer, however, we’ll never know if audiences will get used to it.