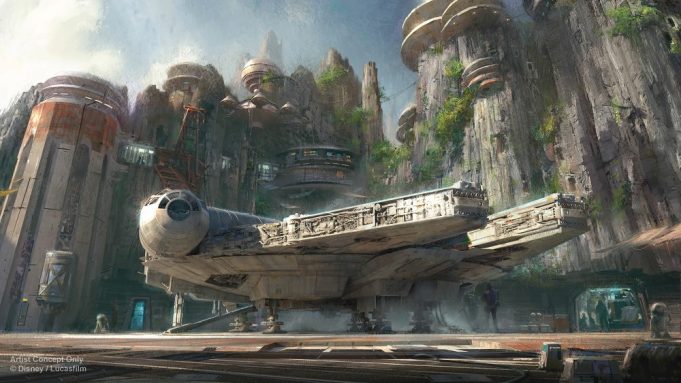 The opening ceremony for the much anticipated new attraction, “Star Wars: Galaxy’s Edge,” is taking place at Disneyland in Anaheim, Calif., with appearances from George Lucas, Disney CEO Bob Iger, and more.

Batuu, a remote trading outpost that will include a full-size Millennium Falcon, is the setting for Galaxy’s Edge, which encompass 14 acres and open on May 31 in Disneyland in Anaheim, Calif., and on Aug. 29 in Disney World’s Hollywood Studios in Bay Lake, Fla.

The planet is meant to look like it has existed for thousands of years. Even the trees must support the concept, just as they would on a film set. Designers chose the tall cork oak near where the Millennium Falcon is docked because it appears weather-beaten and battered, enhancing the idea that the Falcon’s thrusters have damaged it.

Disney’s Imagineers used elements from past “Star Wars” films and collaborated with writing teams from upcoming movies, Disney Plus streaming series “The Mandalorian” and the dozens of “Star Wars” books to create an elaborately interwoven world that can evolve with the franchise.

Get an inside look at what went into crafting the most advanced attraction Disneyland has yet seen here.

Watch the livestream above.