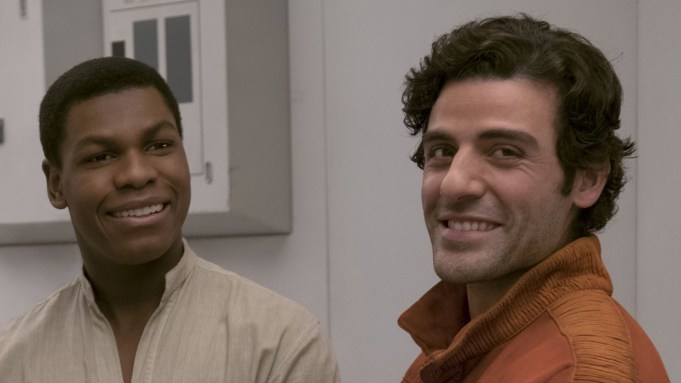 Striking a lightsaber into the hearts of “Star Wars” fans, it appears that a romance between Poe Dameron (Oscar Isaac) and Finn (John Boyega) will not materialize in “Star Wars: The Rise of Skywalker.”

But that does not necessarily mean there won’t be any LGBTQ representation in the final film in the Skywalker saga, either.

The “Star Wars” fan community latched onto the notion of a romantic connection between Finn and Poe almost immediately after the premiere of “Star Wars: The Force Awakens” in 2015, ‘shipping the characters with hashtags like “FinnPoe” and “Stormpilot.”

Speaking with Variety at the “Rise of Skywalker” press junket on Tuesday, however, Isaac expressed regret that the “natural chemistry” between Poe and Finn in “The Force Awakens” was not explored in an overtly romantic way in “Star Wars: The Last Jedi” — and wouldn’t be in “The Rise of Skywalker.”

“Personally, I kind of hoped and wished that maybe that would’ve been taken further in the other films, but I don’t have control,” Isaac said. “It seemed like a natural progression, but sadly enough it’s a time when people are too afraid, I think, of… I don’t know what.”

Isaac noted that the “ambiguity” of the characters’ relationship might allow more people to see themselves in the characters. “But if they would’ve been boyfriends, that would have been fun.”

Though he was less definitive than Isaac, Boyega also noted the lack of a clear romantic connection between Finn and Poe in “The Rise of Skywalker” while speaking with Variety.

“They’ve always had a quite loving and open relationship in which it wouldn’t be too weird if it went beyond it,” Boyega said. “But at the same time, they are just platonic at the moment.”

Even “The Rise of Skywalker” director J.J. Abrams — famously circumspect about revealing anything about his films in advance — cast some doubt on FinnPoe coming to life in his film.

While this would appear to foreclose the possibility of an obvious Finn and Poe romance, Abrams still left the door open to a different form of LGBTQ representation in his film. The filmmaker noted that he’s always strived to find a cast for “Star Wars” that “looked more the way the world looks than not.”

“And in the case of the LGBTQ community, it was important to me that people who go to see this movie feel that they’re being represented in the film,” Abrams said.

So without spoiling the film, Variety asked, does that mean there will be a queer character in “The Rise of Skywalker”?

“I will say I’m giving away nothing about what happens in the movie,” Abrams replied with a smile. “But I did just say what I just said.”