‘Star Wars: Episode IX’: Watch the First Trailer for ‘The Rise of Skywalker’ 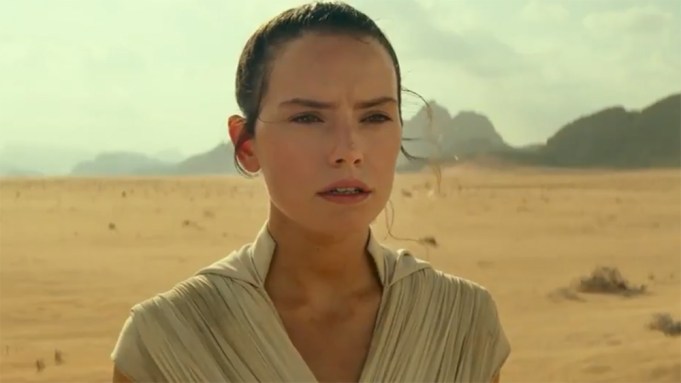 The first look at “Star Wars: Episode IX,” called “The Rise of Skywalker,” is finally here.

It opens with Rey panting in the desert — a nod to how “The Force Awakens” trailer opened with Finn doing the same — before Mark Hamill’s voice tells her, “We’ve passed on all we know. A thousand generations live in you now. But this is your fight.” She then whips out a lightsaber, one that appears to be Luke’s, which Ridley teased during the panel.

We then get shots of Kylo Ren fighting his way through a forest; Lando and Chewbacca piloting the Millennium Falcon; Finn, Poe and C3PO flying through the desert; and previously unused footage of the late Carrie Fisher, including a shot of what appears to be her hands holding a Medal of Bravery, which she previously awarded to Luke and Han Solo in “Star Wars: A New Hope.”

The hands of someone, presumably Kylo Ren, were seen patching together his broken helmet/mask. The mask was smashed to bits in “Last Jedi” but now appears to be returning. Could this mean a return to the dark side for Adam Driver’s character?

The only new character was D-O, a chirping droid who’s shown wheeling next to BB-8.

Perhaps most significantly, though, is the ending reveal. It shows Rey and crew looking at what looks to be Death Star wreckage, and closes with an evil laugh that sounds a lot like Supreme Chancellor Palpatine.

Abrams revealed that the film doesn’t pick up immediately after “The Last Jedi”: “Some time has gone by.”

“This movie, in addition to being the end of three trilogies, it also has to work as its own movie,” Abrams said during the panel. “It’s about this new generation and what they’ve inherited the light and the dark, and asking the question as they face the greatest evil, are they prepared? Are they ready?”

Abrams returned to direct “The Rise of Skywalker” after kicking off the new trilogy with “The Force Awakens” and handing the reins to Rian Johnson for “The Last Jedi.” The main cast of Isaac, Ridley, Boyega, Tran, and Driver is all set to return for the finale of the new trilogy. Keri Russell and Richard E. Grant will join the “Star Wars” family in the newest film, and Billy Dee Williams will reprise his role as Lando Calrissian.

The film will wrap up the Skywalker family saga more than 40 years after George Lucas’ original “Star Wars” hit theaters.

The galaxy far, far away has more stories up its sleeve, too. “The Mandalorian” will premiere on the Disney+ streaming service, and boasts Pedro Pascal, Nick Nolte, Giancarlo Esposito, Gina Carano, Emily Swallow, Carl Weathers, Omid Abtahi, and Werner Herzog in its cast. Jon Favreau penned the series, which is set after the fall of the Empire and before the rise of the First Order. “Star Wars: The Clone Wars” director Dave Filoni, Taika Waititi, Bryce Dallas Howard, Rick Famuyiwa, and Deborah Chow will helm several episodes. In addition to “The Mandalorian,” Diego Luna will reprise his role as Cassian Andor from “Rogue One” in another series.