From ‘Star Trek’ to ‘SpongeBob,’ Here’s All the Content in Play For CBS-Viacom Merger 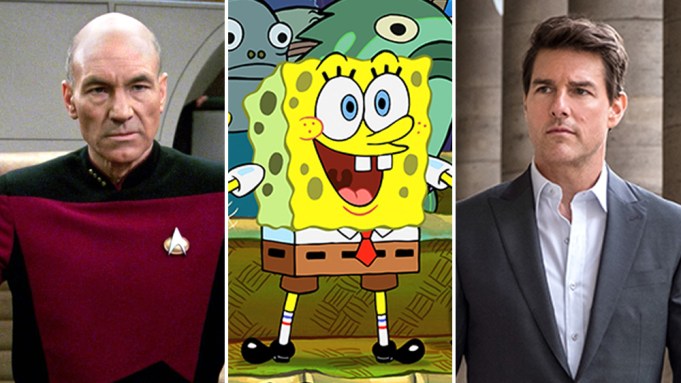 Hollywood’s landscape has changed dramatically since Viacom and CBS were last married in 2005. Now that the two media giants seek a Wall Street reunion, there are endless possibilities for the future of its shared content pie.

Huge action franchises like “Mission: Impossible” and “Transformers” from Paramount Pictures could explore new origin stories or exploit quirky side-characters for streaming series on the CBS over-the-top platform All Access. All Access is also currently building out the “Star Trek” TV universe, with three shows under the franchise’s umbrella set to be on the streaming service in 2020. Signs of synergy are already cropping up as well. CBS, which owns the TV licensing rights to “Star Trek,” gave its blessing for a cartoon take on the sci-fi classic at Nickelodeon this year.

Not only would a flurry of development that leverages the well-known intellectual property of Viacom and CBS pacify shareholders in both companies, it would give the combined entity a leg up in a content arms race their competitors have gained footing in — including efforts from Disney, WarnerMedia and Universal, to say nothing of streamers like Netflix, Amazon Studios and Apple Plus.

Here’s a look at the content up for grabs should the merger pass regulation:

In partnership with Skydance Media, the “Mission: Impossible” series is a massive draw for Paramount that keeps growing its audience and box office with every installment. The latest, “Fallout,” made a staggering $787 million worldwide, almost $100 million more than its predecessor. It’s the kind of flashy IP that other studios have been exploiting for cross-platform content, like Universal’s animated takes on “Fast and Furious” and “Jurassic World,” both to air on Netflix. With six films down and two more to come, the world of “Mission” is rich with characters played by the likes of Ving Rhames and Simon Pegg — quirky corners of story that could easily see series adaptation in places like CBS All Access. “Mission” began as a TV series sold by Paramount to CBS Television in 1966. Paramount holds the franchise rights exclusively.

CBS has gone all in on “Star Trek” TV projects on streaming service CBS All Access in the past few years: “Star Trek: Discovery” was recently renewed for a third season; the animated comedy “Star Trek: Lower Decks” has been ordered for two seasons; Patrick Stewart will reprise his iconic “Next Generation” role in “Star Trek: Picard;” and multiple other projects are in development. The spate of TV projects comes as the “Star Trek” film franchise has stalled out at Paramount. Plans for a fourth film in the rebooted film series have failed to come together, though there continues to be rumblings of an idea for a new film pitched by Quentin Tarantino.

One of the cornerstones of Viacom’s cable portfolio is the long-running, critically-acclaimed adult animated series “South Park.” Thanks to a massive deal signed in 2015, the series will continue at least through its upcoming 23rd season on Comedy Central and Hulu, which will see it cross the 300 episode mark. South Park Digital Studios — a joint venture between series creators Trey Parker and Matt Stone as well as Viacom — will reportedly nab nearly $200 million over the course of the deal. To date, the series has inspired one feature film, multiple video games, and a massive merchandise business.

Not unlike “Mission: Impossible,” the Hasbro Transformer toys and the cinematic universe built around it by producer Lorenzo di Bonaventura seemed to stall creatively in recent years — until 2018’s “Bumblebee” saw the property through a family-leaning, coming-of-age lens built around star Hailee Steinfeld. It proved that creative re-imaginings of even the most clearly-identified brands can still be effective.

MTV was once the home for all things modern music on TV, but has drastically shifted its focus to unscripted programming in recent years. Among the flagship shows on the network currently are “Jersey Shore: Family Vacation,” the “Teen Mom” franchise, and “The Hills: New Beginnings.” MTV also recently launched MTV Studios, a production arm that has set up reboots of “Punk’d” and “Singled Out” at short-form platform Quibi as well as the “Daria” spinoff “Jodie” with Tracee Ellis Ross voicing the lead character.

Nickelodeon remains one of the most iconic brands in the Viacom portfolio and a go-to destination for kids programming. Aside from a vast library of classic cartoons like “Rugrats,” “Doug,” and “Rocko’s Modern Life,” Nick has also remained the TV home of hit franchises like “Teenage Mutant Ninja Turtles.” Nick is also currently working on a live-action version of the critically-acclaimed animated series “Avatar: The Last Airbender” with Netflix.

While not a frame of creepy, night-vision nanny cam footage has been seen from Oren Peli’s “Paranormal Activity” franchise since 2015, when its fifth sequel “Ghost Dimension” debuted, it’s undeniable that films helped create the low-budget horror phenomenon that still reigns at the box office. In the face of top-grossing units like Blumhouse Pictures and New Line’s success with “The Conjuring” universe, it’s hard to imagine this series not crawling back from the dead.

Paramount has a deep bench of culturally resonant nostalgic hits and cinematic treasures. While they might not be in active development, it’s not to say interest won’t be renewed post-merger. This includes rights deals on “Beverly Hills Cop,” which starred Eddie Murphy in three films, and another giant in Hasbro’s G.I. Joe action figure (there are two films in development at Paramount).

Likewise, CBS owns classics that any studio would be happy to kick around a reboot writers room, including: “Happy Days,” “Taxi,” “The Brady Bunch,” “Laverne & Shirley, “Mork & Mindy,” “Family Ties” and “Cheers.”