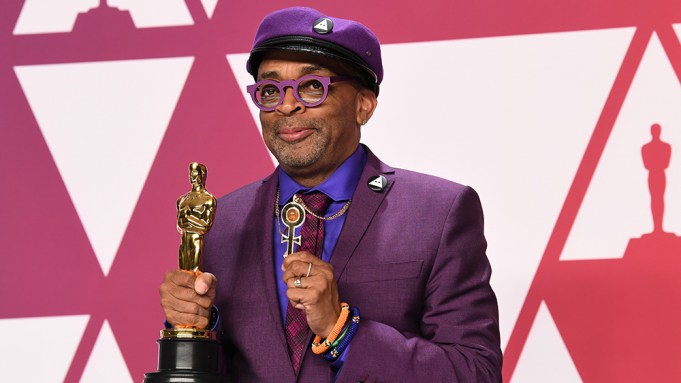 Not everyone was happy about “Green Book” winning best picture.

According to reports from inside the Dolby Theatre, “BlackKklansman” director Spike Lee was visibly upset by the announcement and tried to leave the ceremony before the speeches had concluded.

“I’m snakebit. Every time someone’s driving somebody, I lose,” he later told reporters backstage, in reference to his breakout film, “Do the Right Thing,” losing the Oscar for Best Screenplay to “Driving Miss Daisy” in 1990. “I thought I was court side at the Garden and the refs made a bad call.”

After presenter Julia Roberts announced “Green Book” as Best Picture, AP reporter Andrew Dalton was one of several journalists who noticed Lee wave his arms in anger before storming out of the theater. However, before he could leave, he was stopped at the doors and was forced to return to his seat once the speeches had stopped.

Jordan Peele, the Oscar-winning writer-director behind last year’s “Get Out,” reportedly didn’t clap either, nor did other attendees nearby.

The backlash appears to be in response to controversy surrounding the film, which had been criticized for perpetuating what some saw as a “white savior” narrative approach to examining race relations. The film  topped “BlacKkKlansman,” “Roma” and other critical favorites to win the night’s top prize. “Green Book” was also embroiled in controversy involving the family members of the late Don Shirley, whom the film was based on.

Previously, Shirley’s nephew, Edwin Shirley III, and brother, Maurice Shirley openly criticized the film in an interview with Shadow And Act, calling its portrayal of Dr. Don Shirley a “Symphony of Lies” – a statement that film star Viggo Mortensen called “unjustified” and “unfair.”

Soon after, screenwriter Nick Vallelonga was implicated in yet another controversy when anti-Muslim tweets resurfaced, showing that Vallelonga had previously upheld a false conservative rumor that American Muslims could be seen cheering after 9/11.

Vallelonga later apologized for the tweets writing in a statement, “I spent my life trying to bring this story of overcoming differences and finding common ground to the screen and I am incredibly sorry to everyone associated with ‘Green Book.’ I especially deeply apologize to the incredibly brilliant and kind Mahershala Ali and all member of the Muslim faith for the hurt I have caused. I am also sorry to my late father who changed so much from Dr. Shirley’s friendship and I promise this lesson is not lost on me. “Green Book” is a story about love, acceptance and overcoming barriers, and I will do better.”

Finally, director Peter Farrelly was embroiled in his own controversy after reports surfaced about how he would regularly flash his penis two decades ago on the sets of films like “There’s Something About Mary.”

“True. I was an idiot,” he said in an apology. “I did this decades ago and I thought I was being funny and the truth is I’m embarrassed and it makes me cringe now. I’m deeply sorry.”