‘Spider-Man: Far From Home’ Reviews: What the Critics Are Saying 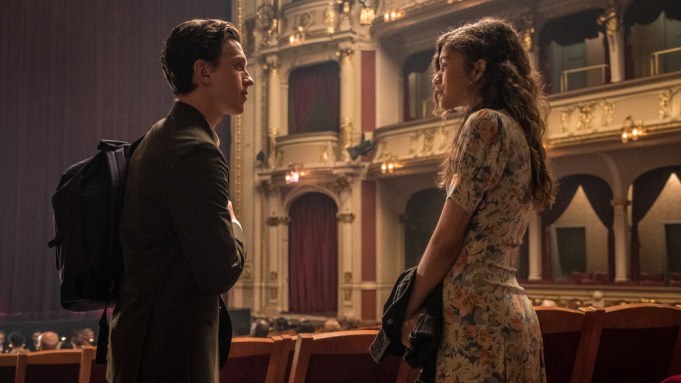 Early reviews have come swinging in for the latest Spider-Man flick. The consensus: a fun and satisfying sequel to “Spider-Man: Homecoming,” although it might tread over too familiar territory and be a bit overlong.

“Spider-Man: Far From Home” currently stands with a 92% on Rotten Tomatoes — the same score as its predecessor “Homecoming.” As the title suggests, Peter Parker (Tom Holland) traverses the landscape of foreign countries, as well as the landscapes of teenage drama and superhero mayhem.

Coming off the heels of the mega-hit “Avengers: Endgame,” would this latest Marvel movie feel slight in comparison?

“What does it feel like to watch a Marvel film in a post-Avengers world? Is there anything at stake left?” wrote Variety‘s Owen Gleiberman in his review. “It has to do with that mysterious, hard-to-bottle chemistry of audience and superhero — the flow of actor, character, mythology, and FX concept as they merge and navigate a universe of eye-widening hermetic excitement. On that score, ‘Far From Home’ takes a quantum leap — or maybe just a spider swing — over the first Peter Parker film in the MCU, 2017’s ‘Spider-Man: Homecoming.'”

Gleiberman, along with the majority of critics, cast their doubts aside, deeming “Spider-Man: Far From Home” worthy enough to emerge out of the enormous shadow of “Endgame.”

“Spider-Man: Far From Home” hits theaters July 2. Take a look at what critics are saying below:

“The key to the new movie’s appeal, apart from the fact that Tom Holland acts with far greater confidence and verve in the title role, is that the entire film is a bit of a fake-out, and I mean that in a very positive way. There’s a good twist, and it’s totally central (I won’t reveal it), but what’s resonant about it is that it enables ‘Far From Home’ to play around with the very issue of what matters in a superhero movie. Where does ‘Far From Home’ fall on the scale of ‘Spider-Man’ movies? It’s more urgent than the last one (and should be even bigger at the box office), with a richer sense of malevolence, and Holland’s kid-in-over-his-head hero — awkward and ingenuous, romantic and quicksilver — is alive inside in a way that Andrew Garfield’s Peter never was. ‘Far From Home’ gets closer, in spirit, to the good Tobey Maguire films. (It has a kiss worthy of the first ‘Spider-Man.’) By the end, this Spider-Man really does find his tingle, yet coming after ‘Into the Spider-Verse,’ with its swirling psychedelic imagery and identity games and trap doors of perception, ‘Spider-Man: Far From Home’ touches all the bases of a conventional Marvel movie. It doesn’t take you out of this world. But it’s good enough to summon the kick — or maybe just the illusion — of consequence.”

“How’s the new movie? It’s good. It’s fun. It goes out of its way to salute the visual effects armies that have made the MCU what it is today, for better or worse. The movie goes on a bit, but then, most of them do. We’d feel ripped off if they didn’t. The whole point of a Marvel movie is to over-serve the customer, so that we leave feeling slightly sick and a tiny bit hoodwinked by the entire interlocking MCU strategy, yet somehow re-upping our commitment for another one.”

“I wound up liking ‘Far From Home’ more than any Spider-Man film this decade. There’s something eerie in the constant assertion of Tony Stark as Tycoon SuperJesus — but don’t underestimate the shifty layers the final act. The hero worship has a slippery quality here, with a less cheerful purpose than the sincere devotion of ‘Homecoming’ or ‘Into the Spider-Verse.’ The teen characters really are a blast, even if one key person skips a whole movie of development between scenes. Some digital effects look good in a boring way, and then some digital effects look bad in a perfect way. ‘Is this real?’ asks Spider-Man. In the end, I really didn’t know. ‘Far From Home’ succeeds with an unusual, troubling virtue: The best parts are the most fake.”

“For all these exotic novelties, this is a very mainstream Marvel picture, written by Chris McKenna and Erik Sommers and directed by Jon Watts, culminating in the traditional CGI damage to tourist landmarks in the time-honoured final battle-spectacular. A new character has been perfunctorily added in the form of Mysterio (Jake Gyllenhaal) and the film is certainly nowhere near the envelope-pushingly surreal ambition of ‘Spider-Man: Into the Spider-Verse’, from last year.”

“Witnessing authentic teen angst in a big-budget superhero flick is a flat-out astonishment. Perhaps more surprising is that our hero doesn’t have to rely on his superpowers to get the job done. Our Peter Parker didn’t age during his five years in the ether, but he matured. He makes forehead-smacking mistakes, only to use his intelligence and reason — i.e., not the magic webs — to battle his way out of trouble. Savvy decision. The next MCU phase will print money even if it focuses on Captain Marvel feeding her cat. But we can only see so many cities blow up and flying crusaders toppling buildings and smashing the ground for the greater good. Let’s make some innovative progress. Amazingly enough, a web-slinger will lead the way.”

“For as good as it is, there’s just no way to receive ‘Spider-Man: Far From Home’ as anything more than a vestigial tale, as it were, on the Marvel saga. It’s an earnest, well-performed, lovably shaggy radioactive specimen that can’t help feeling doubly premature for arriving only half a year after the rapturous ‘Spider-Man: Into the Spider-Verse’ and a whopping two months behind ‘Avengers: Endgame,’ the MCU’s monumental punctuation mark.”

“‘Spider-Man: Far From Home’ is perhaps one of the most comic book-y of recent Marvel films, setting the conflicts on a grand world stage while introducing some truly wacky concepts. Jon Watts, who returns to direct ‘Far From Home’ after impressing with ‘Homecoming,’ delivers some of the most visually inventive action sequences in a Marvel film yet, rivaling the trippy sequences of ‘Doctor Strange’ with a dynamic, deft direction that becomes a touch surreal. Despite their CGI-heavy nature, the action setpieces rarely threaten to become dull, and their settings at beautiful European locales only lend to their epic nature. But one downside of the film’s international settings is that the fish-out-of-water detours feel increasingly redundant when the story of ‘Far From Home’ itself is much more emotionally focused. ‘Far From Home’ has a lot of fat, most of them pertaining to the European vacation segments, that could have easily been cut. The film is far funnier than anticipated, though the comedy doesn’t always land, but the sheer number of jokes loaded into ‘Far From Home’ is impressive. Watts displays a keen understanding of the teenage experience and is able to draw some organic humor out of that, but when blended with Eurotrip jokes, they sometimes fall flat.”

“So, yes, ‘Spider-Man: Far From Home’ is funny and clever – in the end, Peter just wants to enjoy his class trip to Europe with the hopes of growing closer to MJ (Zendaya) – but it’s also a movie about both mourning and deception. Peter is still reeling from the loss of Tony Stark, who remains a specter wherever Peter turns. Peter’s emotions are raw, which also leaves him more susceptible to forces preying on his emotional state. It’s a movie filled with surprises (I don’t say that lightly) that leaves Peter, and a viewer, wondering who is real and who can be trusted. Yet it never feels like a movie filled with dread. It’s a hopeful tone, which, after the last two Avengers movies, is very welcome. ‘Spider-Man: Far From Home’ is a heck of a lot of fun. And I can’t get over how great of a Mysterio movie this is.”

“Many have criticized Marvel films for nearly always ending in a smashy CGI-laden fight between the hero and villain, but this smashy, CGI-laden villain fight is one of the absolute best ever produced in the series. ‘Far From Home’ doesn’t waste an iota of the good will Marvel has earned in its previous offerings — every cheeky nod towards Peter’s future in the MCU feels genuine.”

“Don’t be fooled by the title, or the fact that Marvel finally shot a movie outside of Atlanta: ‘Spider-Man: Far From Home’ is a cute but unadventurous bit of superhero housekeeping that only exists to clean up the cataclysmic mess that ‘Avengers: Endgame’ left behind. As a piece of connective tissue in an ever-metastasizing cinematic universe, Tom Holland’s sophomore (solo) outing as Peter Parker does a clever job of closing the door on one phase and nudging it open to another; it’s funny and colorful and hinges on some MCU deep-cuts that even the most hardcore fans won’t be able to anticipate. As a standalone story, however — another predictable call to action about the burdens of growing up and becoming the person that others believe you can be — it’s a hollow exercise in going through the motions. Fans might be appeased by a successful bunt in a long summer of disgraceful strike-outs, but this is still a maddening failure when compared to the remarkable artistry of ‘Into the Spider-Verse’ or the raw pathos of Sam Raimi’s ‘Spider-Man 2.'”