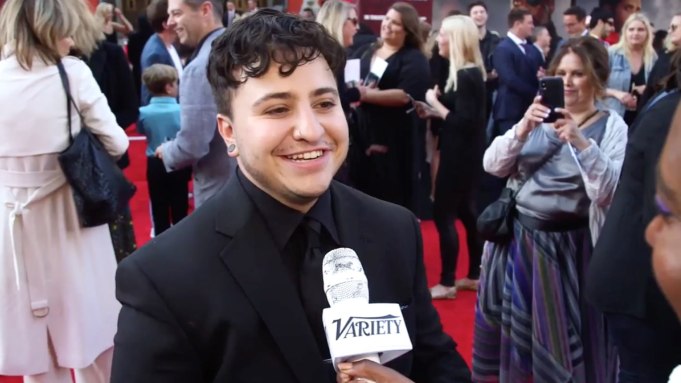 “Spider-Man: Far From Home” marks a number of firsts for actor Zach Barack – it’s his first major movie role, his first red carpet premiere and his debut as the first out transgender actor to appear in a Marvel Studios film. Variety spoke to the newcomer over the phone as he prepared to watch the finished movie for the first time at the Hollywood premiere.

“I’m kind of losing my mind a little bit, but I’m acting like I’m not,” Barack laughed. “I don’t know that it fully has [sunk in]…I don’t quite have the capacity to explain how meaningful it is to me.”

Though DC recently introduced its first trans superhero on TV with Nicole Maines Dreamer on The CW’s “Supergirl,” and Marvel featured Aneesh Sheth’s openly trans character Gillian on Netflix’s “Jessica Jones,” the move to cast Barack was still an important one – a move that the 23-year-old says was fitting in light of his own connection to comics.

“I’m not by any means an expert on comics, but I read them growing up, you know, and they were important. And there’s something very inherently trans about those stories, especially ones where identity and hidden identity is part of them,” he explained. “For example, Peter Parker’s journey [in Spider-Man: Homecoming] is a lot about balancing being a teenager and having this other part of your life.

And that is just so trans, it’s something that I absolutely think I’ve felt on a daily basis sometimes – especially being a transmasculine person because sometimes there’s a pressure to be a different way than I feel naturally inclined to do because I want to fit in, and I have to actively fight that instinct,” he continued. “But the fact of the matter is, being in this movie is so beyond incredibly meaningful and I hope that it means something to other people.”

In the upcoming Sony/Marvel film, Barack plays Peter Parker’s classmate, a friend of the secret superhero who gets caught up as mysterious forces create mayhem worldwide. In a twist of fate, the newcomer was actually planning to spend summer break working at a local Chicago restaurant. Instead, he landed the role of a lifetime, getting the call to audition for “Spider-Man” just two weeks before the epic began filming.

Since news of Barack’s casting broke in January, he’s been inundated with supportive reactions from fans praising the actor and the studio for the inclusive decision. Barack says it’s been an “honor” to receive such positive feedback, adding that he feels the responsibility of being part of this important movement of LGBTQ representation in mainstream media.

Barack says watching Laverne Cox star on “Orange is the New Black” was an important experience for him as a trans person and as an actor, reflecting on what it was like for him growing up without seeing trans representation on screen: “I don’t think I actually saw like a person that I consciously knew was actually trans in any form of media until was like maybe 17, 18.”

“Before that the only thing I’d seen was ‘Boys Don’t Cry,’ which not only doesn’t have a trans person in it, but is a really brutal story and the prospect of coming out wasn’t super exciting after seeing that,” he recalled. “When I saw these messages of other people sort of being like, ‘it’s really meaningful’…I remember I cried the first time I saw one of those, because I remember wanting to write those.”

I was 17 the first time I consciously saw a trans person on tv. It was the first time I had hope that I could both be myself and do what I love. It was the first time I didn’t feel alone and, I cannot stress this enough, it kept me alive. Before that, I’d only seen “Boy’s Don’t Cry”, a movie about a trans boy being brutally murdered. For most of my life, I had little evidence that trans people existed, and I certainly did not see examples of professional success. There were so many times I thought about ending my life because I was so unhappy in my body. I was so angry at the world and myself. I never thought in my life I’d get to be visible in my own right- let alone cast In a Marvel movie. The support and love I’ve gotten from trans kids reminded me how important this is for all of us. We need this and we need more. Today, we keep in mind all of the people who can’t be visibly trans or have no choice in their visibility. Today we keep in mind the trans people, namely trans women of color, who are not safe and who are being attacked and killed. It is not always easy or glamorous, but trans people are beautiful and a real gift to this world. Happy trans day of visibility, I love you all so so much. Enjoy these pics of me with the new friends that have been brought into my life thanks to being trans :) #transdayofvisibility #tdov #transisbeautiful PC: @tonyrevolori @remyhii @justgiveawhistle

In addition to more representation of trans characters, Barack says the increased exposure of LGBTQ allies has also been powerful, noting that his cast mates are just as supportive off-screen.

“I don’t think anybody had any doubt that Zendaya was a very supportive person who understands the nuances of identity politics and was always going to be an ally, but at the same time, her being a supportive person is still really, really meaningful because there are so many people that look up to her,” Barack mused. “Being on set and watching the way people interact with her and with Tom [Holland] and with Jacob…you realize how much of an impact people have.”

Marvel Studios president Kevin Feige and producer Victoria Alonso have also been quoted saying that they hope and are planning for more LGBTQ representation in the Marvel universe, so Barack hopes his casting is the first of many strides forward for representation in superhero films and the industry as a whole.

“I also want intersectionality,” he said. “I’m also hoping that these characters can exist in a nuanced way….I do want to see myself represented on screen, so I do want to see a trans superhero or a queer superhero. And I want it to be hopefully someone who can draw from their experience in real life in that way – [to show] queer people are getting work too. But at the same time, I’m just happy these stories are being told.”