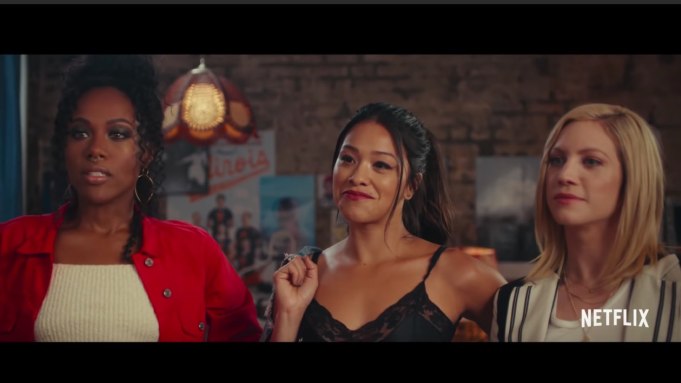 Netflix’s newest romantic comedy focuses more on the love of three girlfriends than it does the tragic fallout of its stars Gina Rodriguez and LaKeith Stanfield.

In a Wednesday trailer for the feature “Someone Great,”  we meet music journalist Jenny (Rodriguez), who is forced to move away from her friends and long-time boyfriend in New York after landing a job at Rolling Stone in San Francisco.

To make the most of their final moments together, Jenny and her two best friends (DeWanda Wise and Brittany Snow) plan out one final adventure before Jenny heads west. And it seems their idea of adventure involves the typical “20-something living in New York City” agenda: tequila shots, electronic music at the club, and late-night drunken pep-talks on subway platforms. It doesn’t hurt that each of them is trying to shake off old habits or relationships and embrace change.

“Why’d he leave you like that?” a concerned stranger asks Jenny while waiting for the train, learning her boyfriend of nine years dumped her. “Why didn’t he want to try, with your pretty teeth and s—?”

The clip is peppered with the same light-hearted encouragements and self-deprecating jokes as Wise’s and Snow’s characters go through their own tribulations in the city. Written and directed by Jenn Katyn Robinson (creator of MTV’s “Sweet/Vicious”) and produced by Paul Feig, “Someone Great” is about heartbreak, on paper —  but looks nothing short of upbeat as this trio navigates the future together.