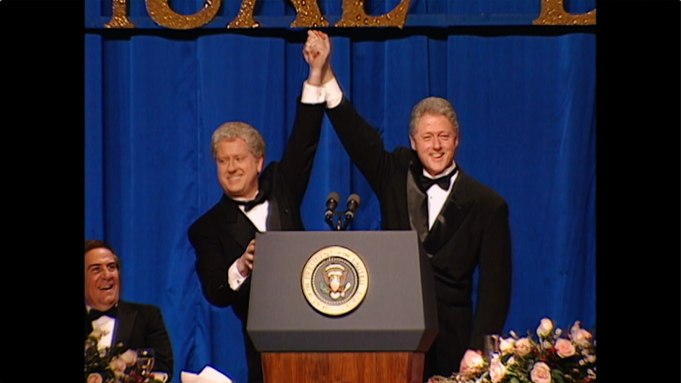 Darrell Hammond’s documentary “Cracked Up” is set to hit theaters on Sept. 13.

The doc, captured by director Michelle Esrick, portrays the ‘Saturday Night Live’ star’s decades-long struggle with substance abuse, self-harm and misdiagnoses as he rose to fame on the iconic sketch show. Known for his iconic impersonations of Sean Connery, Regis Philbin and former President Bill Clinton, Hammond held the record for the longest tenure on the show (14 seasons) until he was surpassed by Kenan Thompson in 2017.

Despite the years of comedy, Esrick’s film reveals that Hammond was actually suffering with repressed memories throughout his ‘SNL’ stretch.

“I am deeply humbled by the impact the film has had since our DOC NYC festival premiere, from helping congress pass a bill into law recognizing trauma as a root cause of addiction – to a woman deciding not to commit suicide because they heard Darrell and myself talking about the effects of childhood trauma on a radio show,” Esrick said. “I can’t wait for this film to be available to everyone.”

The doc weaves together comedy and tragedy as Hammond retraces his years of misdiagnoses — over 40 doctors diagnosed the comedian with mental illnesses such as multiple personality disorder, manic depression and schizophrenia, until a suicide attempt brought him to Dr. Nabil Kotbi. Featuring interviews with Kotbi, as well as ‘SNL’ creator Lorne Michaels and writer/producer Steve Higgins, Esrick hopes to lift the stigma surrounding mental illness through Hammond’s story.

“[Hammond] said something to me that really stood out,” Esrick told Variety in an exclusive interview. “His doctor told him not to call what he had a mental illness rather a mental injury. I felt this huge wave of compassion rush through my body and go out to everybody.”

“Like Darrell says, ‘If you got hit by a car you wouldn’t be ashamed or if you broke your leg you wouldn’t be ashamed,'” the director continued. “But somehow if you have things you can’t explain, anxiety, depression, alcoholism, addictions you feel ashamed.. It’s Darrell’s story, but it’s a bigger story that we both wanted to tell.”

The doc will be distributed by Abramarama and will make its Los Angeles premiere on Sept. 20 at the Laemmle Monica Film Center following its New York release. Each screening will also be followed by a Q+A with Esrick and Hammond.