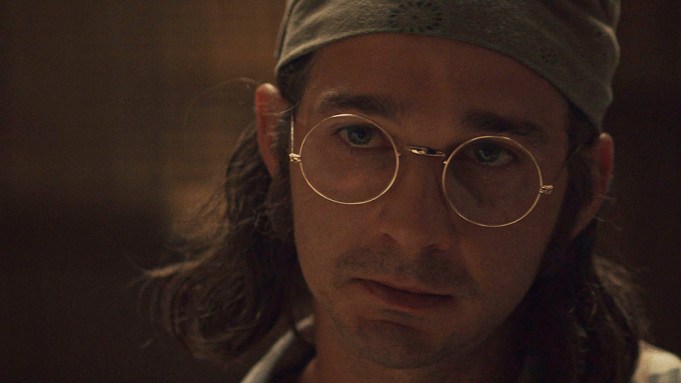 Call it the Shianaissance (or don’t, we would understand), but Shia LaBeouf is igniting an indie box office revival.

LaBeouf further proved his on-screen bankability last weekend as his autobiographical drama “Honey Boy” kicked off above expectations, garnering $288,824 from four venues in New York and Los Angeles. That haul marks one of the best starts for a platform release this year with ticket sales equating $72,206 per location. Other strong theater averages in 2019 include A24’s “The Farewell” ($87,800 per theater), Disney’s “Avengers: Endgame” ($76,601 per theater) and Neon’s “Parasite” ($131,000 per theater).

“It really shows how important a slow theatrical rollout can be,” said Paul Dergarabedian, a senior media analyst with Comscore. “The time of year matters as well. We are in the heart of awards season. ‘Honey Boy’ isn’t duking it out with big named blockbusters in a wide release, it’s doing its own thing.”

“Honey Boy” continues a strong box office showing for LaBeouf, whose feel-good film “The Peanut Butter Falcon” is now the highest-grossing indie film of the year with $20.5 million in domestic box office receipts. Making those benchmarks all the sweeter, Armory Films only spent $6 million on “Peanut Butter Falcon,” which was distributed by Roadside Attractions, while Amazon reportedly shelled out around $5 million for “Honey Boy,” meaning the pair should become profitable for their respective studios. It’s a welcome resurgence for LaBeouf, reviving his box office fortunes after a bad run that saw the financial failures of “Man Down,” “Borg vs. McEnroe” and “American Honey.”

As LaBeouf focuses on more personal projects, he’s regaining confidence from an audience that grew up watching him on Disney Channel and in “Holes.” “Honey Boy” is based on LaBeouf’s childhood, starting as a young actor on “Even Stevens” and later in Michael Bay’s “Transformers” saga. He wrote the script while in rehab after public struggles, including his 2017 arrest for public intoxication and disorderly conduct.

“Shia is a very vulnerable artist and someone who isn’t afraid to put it all out there,” said Dergarabedian. “Others might turn their angst into a tragic life, but he’s woven his into high art.”

Directed by Alma Har’el, “Honey Boy” serves as a window into LaBeouf’s tumultuous upbringing, shining a light into how his abusive father shaped the artist and adult he became. LaBeouf portrays a character based on his father, while Noah Jupe and Lucas Hedges play younger and older versions of LaBeouf. Amazon sold the film to audiences by highlighting the fact that “Honey Boy,” though deeply rooted in LaBeouf’s story, had a universal message that would connect with moviegoers across the country. A studio spokesperson added that marketing materials leaned into reviews that emphasized the movie was a “cathartic” and “honest” experience, one that differentiates itself from other projects currently in theaters.

The theatrical performances of “Honey Boy” and “The Peanut Butter Falcon” are especially impressive considering even well-reviewed movies have stalled at the indie box office in 2019. “Booksmart” became a cautionary tale earlier this year when Annapurna dropped the critically beloved film in over 2,500 theaters across the country, where it got crushed by Disney blockbusters in the heat of summer. Like “Peanut Butter Falcon,” Amazon is deploying a paced rollout for “Honey Boy” in an attempt to build word-of-mouth before it expands nationwide in two weeks. Last weekend’s release scored multiple sold-out screenings on both coasts, prompting an unplanned move into the Dome at Arclight Hollywood. That kind of demand suggests “Honey Boy” could cross over beyond its core arthouse audience and become one of the rare indie movies this year to find mainstream appeal.

“Honey Boy” will likely resonate more on the coasts given its entertainment industry ties. Meanwhile, the modern-day retelling of Huckleberry Finn in “The Peanut Butter Falcon” thrived in America’s Heartland. LaBeouf portrays a fisherman on the run, who befriends a young man with Down syndrome (Zack Gottsagen) who escaped from an assisted living facility. Amazon insiders note that momentum from that film benefited “Honey Boy.”

“He’s turned lemons into lemonade with what he’s done this year,” Dergarabedian said. “You’ve got two of the most talked about and acclaimed indie movies of the year.”