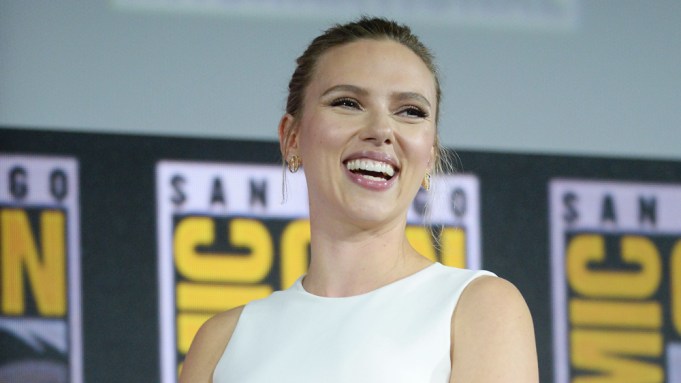 While she can’t divulge spoilers, she let out a big sigh of relief after the film was officially announced on Saturday during the Marvel Studios presentation at Comic-Con.

“I feel like a weight has been lifted,” the Oscar nominee told Variety.

“Black Widow” is currently in production in London. Johansson was joined at Comic-Con by director Cate Shortland and costars Rachel Weisz, Florence Pugh and David Harbour. Their trip to San Diego was only about a day-long before they had to jump on a plane back to the set. “We do about seven pages of dialogue this week so maybe [“Black Widow”] is a little different than most Marvel movies,” Johansson said. “There’s lots of talking. I get to talk more. I could tell you that.”

She also said of her titular character, “I think we’ll learn what she’s scared of.”

During the presentation in Hall H, Johansson remarked that she couldn’t have made the movie a decade ago.

“I think I could have made the film 10 years ago but it would have been a very different film,” she explained to Variety. “I think it probably would have been much more of a caricature of a person. I feel after living an extra 10 years and becoming a mother and you know, life and how it happens to you, I feel much more in myself and able to explore all the kind of things that make me uncomfortable and then just lay it out for you guys.

“It feels like I’m a stronger person by the fact that I have embraced my vulnerability,” she continued. “And I think that will make this version of the character really, hopefully, complex.”

Johansson also gushed over Shortland. “Cate is the perfect director because she always goes back to dig for what is real, what is brutally real and honest and what the truth of each scene is,” she said. “And not only does she have an incredible visual vocabulary, which is obvious in her work, but she’s always searching for the uncomfortable, brutal truth, and that’s what we need for this film.”