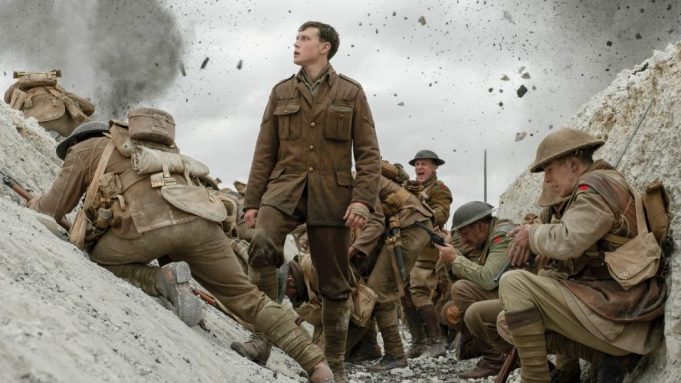 Sam Mendes’ “1917,” a gripping survival story that unfolds in the crucible of World War I, inserted itself into the awards race on Saturday with a series of well-received screenings in New York.

The movie, which is made with great craft and care, now faces the unenviable task of trying to elbow into a crowded field of best picture contenders, one that already includes the likes of Martin Scorsese’s “The Irishman,” Bong Joon Ho’s “Parasite,” and Quentin Tarantino’s “Once Upon a Time in Hollywood.”

Many of these films have been on the festival circuit and these directors have subjected themselves to weeks of grip-and-grins with voters, giving them a head start. And yet “1917’s” epic sweep and undeniable artistry likely means that it has a strong chance of making the cut despite its 11th hour entry into the race. Director Sam Mendes will likely be in the conversation with those auteurs for his work on “1917,” which is from a technical perspective, a staggering achievement. The movie unspools in one, nearly uninterrupted shot — an artistic decision that gives the film a greater sense of urgency and verisimilitude and one that required six months of rehearsing and extensive preparation.

But directing, like picture, is an intensely competitive category, and Mendes may find himself out in the cold, given that Noah Baumbach (“Marriage Story”), Greta Gerwig (“Little Women”), and Fernando Meirelles (“Two Popes”) are also vying for inclusion. The film is so director-driven, such a virtuoso display of pure filmmaking chutzpah, that Mendes may score his second directing nomination, having previously won for 1999’s “American Beauty.” After all, voters swooned when Alejandro González Iñárritu waded into similar one-shot territory with 2014’s best picture and best director winning “Birdman.”

“1917” will likely generate a great deal of attention in several below-the-line categories. The cinematography from Roger Deakins, a 14-time nominee and recent winner for his work in “Blade Runner 2049,” will almost certainly be nominated. It could even snag Deakins a second Oscar. At a Manhattan screening, Deakins’ name on the screen seemed to generate the loudest applause. Likewise, “1917’s” production design, sound mixing and editing, and score from Thomas Newman could all score nominations. Lee Smith’s editing may also get some love unless voters penalize the movie’s editing for its one-shot gambit, something that happened to “Birdman’s” editing team of Douglas Crise and Stephen Mirrione.

As for the performances, George MacKay, as a war-sick corporal handed the unenviable task of carrying a vital message through no man’s land, is particularly impressive. It’s a physical turn, one that finds him battling exhaustion, sniper fire, and the elements in a way that’s reminiscent of Leonardo DiCaprio’s similar endurance act in “The Revenant.” And yet, MacKay’s work may be too subtle to vault him into a pitched battle for best actor. It’s hard to see him knocking off Robert De Niro (“The Irishman”), Jonathan Pryce (“The Two Popes”), Joaquin Phoenix (“Joker”), Adam Driver (“Marriage Story”) or DiCaprio (“Once Upon a Time in Hollywood”), all of whom have showier roles. Dean-Charles Chapman is also compelling as the young soldier who accompanies MacKay on the suicide mission, but supporting actor is overflowing with meaty performances, which likely means he won’t make the grade.

History may be on “1917’s” side. War movies are a favorite with the Academy. The first of its kind to win best picture was the William A. Wellman-directed 1927 epic “Wings.” Of course, there’s the iconic “Gone With the Wind,” which takes place during the Civil War. It took home the top prize in 1939. The last war film to win best picture was “Hurt Locker” in 2009. The film also made history when Kathryn Bigelow became the first woman to win for directing.

Most recently, “Dunkirk” earned three below the line wins out of its eight noms in 2018. That same year, “Darkest Hour” was up for six statuettes, winning one for lead actor for Gary Oldman and another for makeup and hairstyling. The best picture went to “The Shape of Water,” not exactly a war movie, but it does take place at a secret government laboratory at the height of the Cold War.

At a New York screening, Mendes said he was inspired to make “1917” because of stories that he was told as a child by his grandfather, a veteran of the Great War. The conflict, one that cost hundreds of thousands of lives, cast a shadow across Europe, leaving deep scars on nearly every family. “1917” tries in some way to pay tribute to the sacrifices of that lost generation.

On an early draft of the script, Mendes included a quote from Erich Maria Remarque’s novel “All Quiet on the Western Front,” another work of art that attempts to evoke the horror of that brutal fight.

“We have much to say, that we could never say it,” the quote reads.

Marc Malkin contributed to this report.