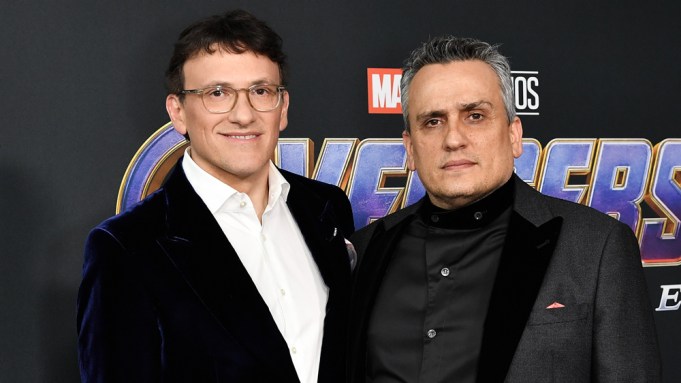 “We had to convince Robert Downey, who was not under contract to do ‘Civil War,’ to do that movie and to actually play a bad guy,” Joe Russo said.

So how do you get one of the world’s highest-paid actors to appear in a movie he didn’t sign up for?

“A lot of meetings in Malibu,” Anthony Russo said.

“You say, ‘Look, we’re going to try and do something really risky here. We want to deconstruct, we want to inject some edge and some tension into these stories.’ And he has to keep telling these stories, so he wants to play something compelling,” Joe said. “So when you say to him, ‘Hey, you get to be a villain and it’s going to make your next few movies a lot more interesting and give you more to play,’ it’s not that hard to sell.”

Even though it wasn’t an official “Avengers” movie, 2016’s “Captain America: Civil War” featured most of the superheroes divided over whether to register the team with the United Nations. Captain America and Iron Man led the two opposing sides against each other in a climactic battle that left the former teammates not on speaking terms when the dust cleared. The film helped set up “Avengers: Endgame,” which is believed to be the Russos’ final movie with Marvel.

“We’ve only taken it one at a time, honestly, except for ‘Infinity War.’ We don’t have any plans to do any more movies with Marvel. Now, we love Marvel — we couldn’t love them more. Our working experience on these films have been among the greatest in our careers. I wouldn’t be surprised if somewhere down the line we end up doing something when we find the right story. But right now, this is it,” Anthony said.

The Russos’ next film, “Cherry,” will reunite them with Tom Holland, better known as Spider-Man in the MCU. The young actor has undergone intense preparation to play an army veteran suffering from post-traumatic stress disorder and an addiction to opioids.

“This is a big shift for all of us, doing a treatise on the opioid epidemic. We’ve lost people very close to us to the epidemic, so it’s a very personal and passionate project for us,” Joe said. “I think it’s a very challenging role for him and he’s really working hard preparing for it, both mentally and physically.”

Starting on May 2, a new episode of “The Big Ticket” will be released every Thursday on iHeartRadio or wherever your favorite podcasts are found.