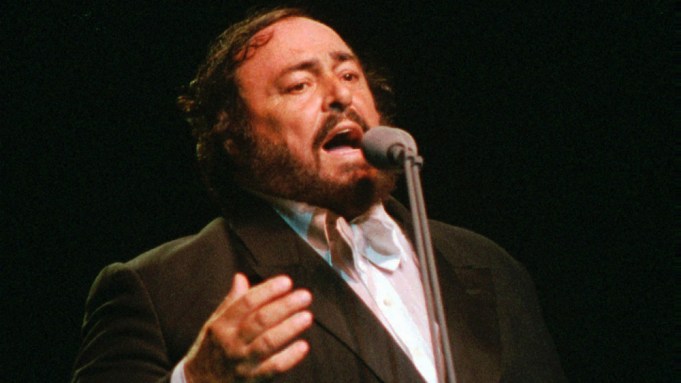 After being teased at the Grammys, Ron Howard’s documentary on Luciano Pavarotti, the legendary Italian opera singer, takes center stage with an official trailer.

“Pavarotti: Genius Is Forever” will hit theaters on June 7, and Tuesday’s trailer showcased footage from interviews, concerts and family archives. It also featured testimonies from his fellow Three Tenors members José Carreras and Plácido Domingo, as well as U2’s Bono.

Howard will reunite with Nigel Sinclair, Brian Grazer and Michael Rosenberg, his team of producers from “The Beatles: Eight Days A Week,” in addition to Jeanne Elfant Festa, for the documentary. The non-fiction film, from Polygram and CBS Films, will cover Pavarotti’s adolescence to his rise to global fame with his powerful and singular vocals.

Pavarotti spent his childhood in Italy taking singing lessons and learning from his father, who was also a tenor. After several small shows in Italian opera houses, the singer began to tour internationally and made his first appearance in the U.S. at the Greater Miami Opera in 1965 after a performer fell ill and had no understudy.

He quickly became a global sensation for singing the aria “Nessun dorma” for the 1990 FIFA World Cup in Italy. Pavarotti, Carreras and Domingo formed the Three Tenors group and performed the tune on the night before the World Cup finals. The trio went on to perform megahit concerts in front of hundreds of thousands of fans during global tours, charity benefits and and the following three World Cups. Their Grammy-winning live album is the best-selling classical album of all time, and Pavarotti won the Grammy Legend Award in 1998.

As the trailer shows, the singer dedicated a large portion of his life to a series of benefit concerts titled Pavarotti & Friends, giving proceeds to humanitarian causes like the United Nations High Commission for Refugees, for which he raised more money than any other individual. Legendary musicians and celebrities from all over the world joined him, like Princess Diana, Elton John and Mariah Carey.

During his international farewell tour in 2006, Pavarotti was diagnosed with pancreatic cancer and died at his home in Modesta, Italy, in September 2007. CNN aired the funeral in its entirety.