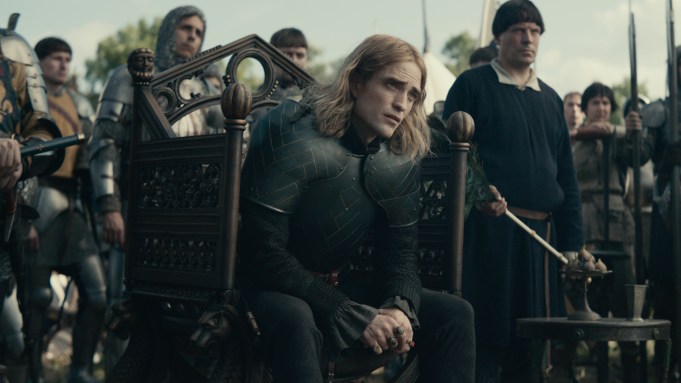 How much direction did Robert Pattinson need to play the heir to the French throne in “The King”?

As it turns out, not much — just let him be.

“Pretty much in ways that I fully 100% endorse and love, that character is a Robert Pattinson creation,” the film’s director, David Michôd, said on this week’s episode of Variety and iHeart’s “The Big Ticket” podcast. “A lot it was kept under wraps.”

Michôd continued, “The great fear always is that you end up with ‘Monty Python and the Holy Grail’ and ridiculous French accents. But at the same time, I kind of needed his character to be kind of absurd.”

In the film, based on several William Shakespeare plays, Pattinson portrays the son of the French king who instigates war with Henry V (Timothée Chalamet). The “Lighthouse” star appears with long, blonde hair and is adorned with jewelry. He provokes Henry V with insults, including cracks about his “tiny” manhood.

“His whole purpose is to be a jerk and to just torment Timmy,” Michôd said. “So I kind of needed him to be a larger-than-life jerk. He needed to be ridiculous. He needed not to have a lot of substance underneath him. He’s just there to annoy.”

When did Michôd first start thinking about casting Chalamet as Henry V? How did Joel Edgerton put on all that weight to play Sir John Falstaff? Find out by listening to the entire episode of this week’s “The Big Ticket” below.