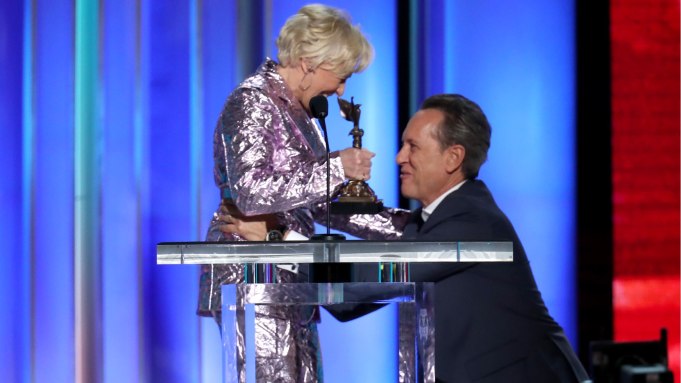 Glenn Close, Ethan Hawke and “If Beale Street Could Talk” took home the top prizes at the 2019 Film Independent Spirit Awards, held Saturday on the beach in Santa Monica, Calif.

Close stole the Aubrey Plaza-hosted show by inviting her dog Pip up on stage to accept best female lead, causing massive oohs and ahs and considerable distraction from her triumph for “The Wife.”

“It’s always the work, isn’t it?” Close said of the Sony Pictures Classics film, before thanking the women in her category including Carey Mulligan and and Regina Hall.

Producers for “Beale Street,” led by Adele Romanski, agreed with Close in a short but sweet acceptance speech that justly gave all the credit to author James Baldwin for his lush romance.

Ethan Hawke won for best male lead for Paul Schrader’s “First Reformed,” though his costar Amanda Seyfried accepted on his behalf, while Richard E. Grant took the best supporting male prize for his role in “Can You Ever Forgive Me?”

Grant edged out stiff competition in Adam Driver from “BlacKkKlansman” and surprise nominee Raúl Castillo of “We The Animals.” The star recounted his long career in indie films, thanking actors like Daniel Day Lewis for passing on roles he eventually nabbed. Grant was the third actor to be cast in his award-winning part, an accomplice and consigliere to Melissa McCarthy’s Lee Israel, Grant said.

Netflix’s big contender “Roma” took best international film, and saw writer-director Alfonso Cuaron pay tribute to a trio of his stars in the room with him, including best actress Oscar nominee Yalitza Aparicio.

The Fred Rogers nonfiction film “Won’t You Be My Neighbor?” took best documentary. Director Morgan Neville underscored the importance of the legacy left behind my the children’s show host.

“Fred knew that kindness was more than something that sounds good on bumper sticker. Radical kindness, which means civility, is something like oxygen,” said Neville.

In an unexpected win for best director, Barry Jenkins said he did not feel comfortable being on stage over three female nominees in his category. The “If Beale Street Could Talk” helmer encouraged producers, studio executives and financiers in the room to help boost the amount of projects directed by women. He specifically singled out “You Were Never Really Here” director Lynne Ramsay, thanking her for her guidance when he was a student filmmaker.

“I think this award has your DNA in it, my dear,” Jenkins said. He also thanked Annapurna CEO Megan Ellison for financing the adaptation of James Baldwin’s novel.

Best screenplay went to Nicole Holofcener and Jeff Whitty for “Can You Ever Forgive Me?” Holofcener lamented that Lee Israel had not lived to see the movie they made about her, saying she would have enjoyed the awards show “but probably wouldn’t have been very nice.” The top cinematography prize went to Sayombhu Mukdeeprom of “Suspiria.”

In a nail-biting category for best first feature, Boots Riley brought it home for “Sorry to Bother You” over “The Tale,” “Wildlife,” “Hereditary” and “We the Animals.” He used his acceptance speech to applaud “direct action” political movements that have trickled into contemporary filmmaking, and also chided the CIA for “attempting a coup” for crude oil in Venezuela.

“I was told very often that I was a comedian for 13-year-old girls. and f— yeah I am! I’m proud of that. They deserve to be paid attention to,” Burnham said. He also admitted he was intimidated entering Hollywood’s high-art circles coming from his stand-up, and thanked the room and community at large for embracing him.

The crowd also embraced host Plaza, whose deadpan shtick livened up an afternoon honoring a field of blood-and-guts dramas.

“They originally wanted no one to host this show, but they’re already booked for tomorrow,” Plaza said, nodding to the hostless Oscars ceremony that will air live on Sunday. The “Parks and Recreation” star opened the ceremony with a ritual sacrifice skit where she and an army of indie actresses conjured the “independent spirit awards spirit.”

The Spirit Awards nominations are selected by a 46-member committee and the awards are voted on by the 6,000-plus members of Film Independent. The eligibility rules require that movies be produced in the U.S. for less than $20 million.

“Get Out” won the best feature film trophy last year. In the prior four years, “Moonlight,” “Spotlight,” “Birdman,” and “12 Years a Slave” won both the Spirit Award and the Oscar for best picture.