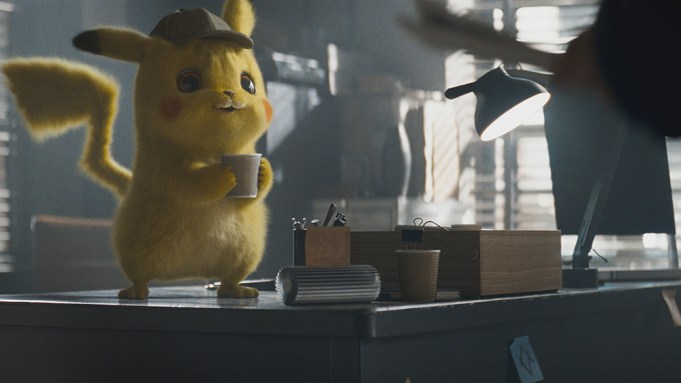 That figure nearly matched the $5.9 million in Thursday previews for “Shazam!,” which went on to earn $53.5 million in its domestic debut weekend on April 5-7. Cheerleading comedy “Poms” scored $225,000 at 2,000 sites on Thursday night.

Warner Bros.-Legendary’s “Detective Pikachu” is expanding to 4,202 sites Friday as the live-action Pokemon adaptation takes on the third weekend of Disney-Marvel’s record-setting blockbuster “Avengers: Endgame.” Forecasts have ranged as high as $80 million for “Detective Pikachu,” while Warner Bros. is predicting a three-day haul closer to $50 million.

“Avengers: Endgame” has generated a massive $652.9 million in North America in its first 13 days, making it the sixth-biggest domestic release ever. The superhero saga, which took in $147 million domestically in its sophomore frame, could generate another $60 million to $80 million this weekend. “Avengers: Endgame” is already the second-biggest worldwide movie of all time with $2.3 billion in ticket sales worldwide, behind only James Cameron’s “Avatar” at $2.79 billion.

“Detective Pikachu” carries the drawing power of Ryan Reynolds, who voices the yellow Pokemon in the fantasy-mystery. The story centers on Justice Smith’s teenage character teaming up with his dad’s Pokemon partner to search for his missing father. Rob Letterman directed the film, based on the popular Pokemon series and the 2016 video game of the same name.

“Detective Pikachu” is rated PG, making it the first in the Pokemon series without a G rating. The movie has mostly impressed critics and carries a 66% “fresh” rating on Rotten Tomatoes. The film is also opening in most international markets this weekend, including China.

Two female-led comedies are arriving on Mother’s Day weekend, with STX opening Diane Keaton’s cheerleading pic “Poms” and United Artists launching “The Hustle,” with Rebel Wilson and Anne Hathaway. Forecasts are higher for revenge tale “The Hustle,” with an expected debut between $9 million and $14 million from 3,007 locations. Reviewers have been unimpressed, giving the film a dismal 17% score on Rotten Tomatoes.

“Poms,” which also stars Jacki Weaver, Pam Grier, Celia Weston and Rhea Perlman, follows a group of women in a retirement community who form a cheerleading squad. It’s expected to earn between $7 million and $10 million when it launches in 2,750 venues. Its current Rotten Tomatoes score is 28%.

Fox Searchlight’s biopic “Tolkien” is also debuting at 1,495 sites amid modest expectations. Nicholas Hoult, Lily Collins, Colm Meaney and Derek Jacobi star in the film — the first Fox Searchlight title to hit theaters since the Fox studio was acquired by Disney in March.

“Avengers: Endgame” and “Captain Marvel” have helped the overall domestic box office recover from a dismal January and February. Total 2019 moviegoing, as of May 8, was $3.73 billion, down 10.4%. Comscore senior media analyst Paul Dergarabedian noted that the coming weeks include potentially strong performers with “John Wick: Chapter 3,” “Aladdin” and “Godzilla: King of the Monsters.”

“As ‘Endgame’ enters its third weekend with a strong box office tailwind and $2.3 billion already banked worldwide, a more competitive summer marketplace is beginning to take shape as ‘Pokémon Detective Pikachu’ looks to open an investigation into how to bring massive dollars to the multiplex around the world by drawing fans young and old to this well-known and beloved media franchise,” he added.