‘Peppa’ Goes Viral Ahead of China’s Year of the Pig 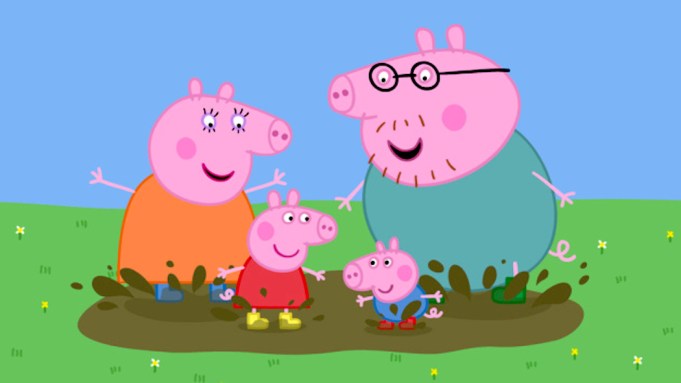 With a helping hand from e-commerce giant Alibaba, China has succumbed to Peppa Pig mania. And following a recent agreement with STX, North American audiences will also get a taste of Chinese New Year swine fever.

As the lunar new year approaches – the year of the pig, according to the Chinese zodiac – there’s no way to escape Peppa or her upcoming movie, “Peppa Pig Celebrates Chinese New Year.” Shopping malls, grocery stores and restaurants across China are plastered with her image, despite the happy cartoon character having been banned on social media last year for being too “gangster” and a potential “negative influence.” Now, the pink porker appears to have the blessing of no less than the ruling Communist Party.

“Peppa Pig Celebrates Chinese New Year” comes out in theaters Feb. 5, the first day of the new year holiday period. An official co-production between Entertainment One and Alibaba Pictures, Alibaba’s film investment and distribution arm, it faces stiff competition from 12 other films opening the same day, including two other pig-themed animations: “The Legend of Pig Warrior” and “Boonie Bears: Blast Into the Past.” But Peppa’s prospects look promising, owing to her popularity not just with kindergartners but with ironic Chinese teens who have adopted her as a symbol of self-mockery and rebellion.

The Peppa Pig show was an immediate hit among youngsters when it landed in China in 2015. Two years later, the character became immensely popular with post-’90s kids who identified with the “shehuiren,” or “gangster,” youth subculture but who didn’t have the money to dress the part (think tattoos and gold chains). To poke fun at themselves, they took on innocent Peppa as their emblem, painting on fake Peppa tattoos, wearing toy Peppa watches, and remixing images and videos to make her, say, sport sunglasses, chains and a reefer.

Alarmed at the trend, Douyin, China’s version of TikTok, deleted more than 30,000 videos hashtagged #PeppaPig. The government-aligned Global Times newspaper warned: “The popularity of Peppa Pig in China shows a spirit of innovation, but it could also bring negative influence to the young generation if they overindulge in such a subculture.”

Now, the beloved British toon star has gone viral once again, but this time in a much more state-sanctioned manner.

Earlier this month, the film’s director, Zhang Dapeng, released a five-minute, live-action promo that has brought viewers to tears and worked state media into a tizzy of praise. The adorable short, which both encourages family togetherness and promotes the Peppa movie, is perhaps one of the most successful examples of the localization of foreign content in China in recent memory, and has been viewed more than 200 million times.

“Tell Grandpa what you need [as a new year’s gift] and I’ll prepare it for you,” an old man tells his grandson in a thick provincial accent on his dodgy mobile phone, while standing alone on a desolate hilltop to catch a signal. “Peppa? What’s Peppa?”

The phone signal cuts, sending grandpa on a goose chase to figure out what a “Peppa” is. He tries looking it up in a dictionary, asking his village over the loudspeaker system, and hassling everyone he knows before ultimately fashioning a gift out of a metal fan painted pink to look like Peppa’s face. The short video ends with the message: “On the first day of the new year, don’t accept gifts; instead, go with the whole family into the city to watch Peppa.”

The short has been praised by the Communist Party’s highest anti-graft body, the Central Commission for Discipline Inspection and Supervision, and its official mouthpiece, the People’s Daily. “It was the emotional resonance of this uniquely Chinese feeling [of longing for family reunion] that made this video a hit,” the newspaper said. “As a cultural phenomenon, ‘What is Peppa?’ has brought a good beginning to 2019.”

Thanks to the short’s success, California-based STX Entertainment announced Thursday that it plans to release the “Peppa” film in 32 U.S. markets. It will play in 65 theaters across the U.S. on the same day that it debuts in China, subtitled in English.

“I got a phone call from Alibaba a week and a half ago, shortly after the marketing materials for Peppa in China had gone super-viral… And it was clear to us that the virality was extending far beyond the mainland to Mandarin-speaking U.S. populations,” STXfilms chairman Adam Fogelson told Yahoo Finance. “There certainly could be – not on the Marvel level, of course  broad interest. Depending on what happens in the first week or two, anything is possible.”

STX is targeting cities with large Chinese American populations, including Los Angeles, New York and San Francisco, with family-friendly matinee and early screenings. Profitability “is likely to be limited,” Fogelson acknowledged, but said the goal of the partnership is to deepen ties with Alibaba. The company is already partnered with Alibaba Pictures on upcoming animated film “Uglydolls” and on “Steel Soldiers,” to be directed by Robert Zemeckis.

Two new Chinese New Year-themed special TV episodes of “Peppa Pig” will also hit the airwaves on Feb. 5, Entertainment One announced Monday. They will be aired by Nickelodeon and free-to-air broadcasters in regions including Australia, New Zealand, Europe, Canada and South Africa, and will play in Mandarin in Asia, Taiwan and Hong Kong.