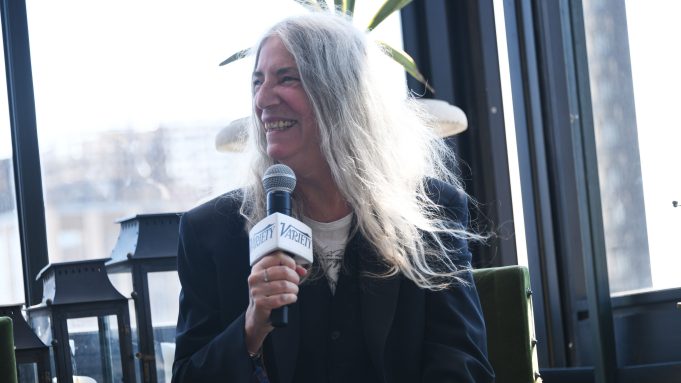 On Thursday afternoon Variety partnered with IFP for the first “10 Storytellers to Watch” event, and among the novelists, lyricists, podcasters, playwrights, graphic novelists and brand storytellers who were honored was the pioneering singer, poet and author Patti Smith. The legendary artist received the Impact in Storytelling honor not only for her formidable body of songs and poems, but also for her memoirs “Just Kids” and “M Train,” the former of which won the National Book Award and is universally regarded as one of the best books in the rock music canon.

In a 15-minute talk with Variety’s Steven Gaydos, Smith talked about the influence of the Beat poets, some favorite authors — she mentioned Roberto Bolano, Haruki Murakami and manga comics — and, perhaps most interestingly, her experiences hanging out with Bob Dylan and how she came to appear performing in the recent Martin Scorsese-helmed documentary “Rolling Thunder Revue,” which includes fascinating footage from Dylan’s 1975 tour of the same name.

When asked whether the Beat poetry world she inhabited in the 1960s and ‘70s was too much of a boys’ club, Smith said, “I don’t know — I was in it! I never thought about that. These people I got to know as my friends and mentors — William Burroughs, Allen Ginsberg, Gregory Corso. They treated me really well when I was a girl working in a bookstore, writing poetry, and they became good friends as I got older and they were kind to my children. I never felt excluded. And in terms of rock and roll, I never genderized it — I just loved it, I was equally into Darlene Love and Jimi Hendrix. I’m gender-blind: I just look at the work and I love the work and it doesn’t matter which gender does it.”

She then quite modestly played down the vast influence she has had on rock music, and female artists in many disciplines. “That’s really nice [to say], I used to say that about Bob Dylan,” she said. “But they would have done it themselves. In the end, if it’s your destiny, you’ll find your way, and if I was a helpful guide, even in an abstract way, I’m happy about that. But people that do their work are guided by their inner impulses, and we can give them a helping hand, but they would have found their way.”

She also spoke of the work that goes into creating iconic art. “The Beats were all quite educated,” she said. “They all had gone through the Romantic poets and European literature and Rimbaud, and they had all this information — and the influence of jazz, with Kerouac writing while listening to jazz. They were all so evolved and intelligent their work was not just revolutionary — it had substance that we’re still plowing through. And it’s not like Allen Ginsberg popped up out of nowhere: He vigorously studied William Blake and Walt Whitman, and he also loved the Beatles. All these great teachers were his spiritual icons and they are all seeded in his work. And they all fought a lot of fights for us, censorship battles and [things like that]. They weren’t just workers and revolutionaries; they were teachers, and because many of them lived for a long time, we were privy to their teaching.”

Asked who her favorite storyteller is, she said, “My mother was the best storyteller I ever knew. If she was here right now she would take my microphone and say ‘Patricia can tell a good story'” — as evidenced by Smith’s stellar “Words and Music” retrospective show last fall, available on Audible — “‘but I have a few more.’ One of her most famous stories was when she met Nat King Cole when she was really young. She used to sing in jazz clubs and she went down to Atlantic City to an after-hours bars and this fella was playing piano” — which Smith pronounced “pianna” — “and then he sang ‘Tangerine,’ and my mother went up to him later and said, ‘You’re a great pianist but you should be a singer — you have a real way of singing.’ And she’d always save that for the [punchline] when she was telling that story: ‘And that man was Nat King Cole.’”

Gaydos then brought up the recent spate of music biopics such as “Bohemian Rhapsody” and “Rocket Man,” and asked whether she looked at the idea of a Patti Smith film with glee or trepidation. “I’m not putting them down,” she replied, “but I’m a fiction person. I don’t really go to the movies to see reenactments of stuff that already happened during my lifetime. I don’t find it appealing. I’ve thought about ways to present ‘Just Kids’ to the world, and I’m still thinking about that. But all of these things are like soundbites of a person’s life, and there’s so much inaccuracy in the that people are portrayed, especially living people and that intensely bothers me — perhaps not the ones you’re talking of. But there’s so much apocrypha out there —I look at stuff written about me and accounts of things that supposedly happened, and I go ‘Wow, if I actually did any of that, what a renegade I would be!’ Even in the ‘70s, I was a bookworm. I like to read books drink coffee and write poetry. I was in some ways boring.”

Reminded that her performance in “Rolling Thunder,” let alone her career, is anything but boring, Smith went into storyteller mode herself. “It was a strange thing,” she said. “I was working at [legendary New York bookstore] the Strand, and had my band — I don’t even know if I had a drummer yet. But Bob came to see us at the Bitter End or somewhere, and back then to have Dylan come see you was a big deal because he was very secretive and private. And then I started seeing him on the street because he was staying in [Greenwich] Village then, and he was always really nice to me.

“Then he asked me to come to this thing at Gerdes Folk City or somewhere, I didn’t know what it was, but I went. And the whole idea was he wanted to start this vaudeville show or something — he wasn’t quite sure what he wanted it to be, poets and people improvising, and I was a good improviser. All of a sudden there are all of these people there, and a lot of them are well known [Dylan, Ginsberg, Joan Baez, Robbie Robertson], and was asked to go up onstage and do something.

“Now, I don’t play anything — I don’t [really] play guitar and I had nothing prepared, so I just went up and took a breath and did what I did. And right in the middle of it I lost the thread of my improvisation — which I found again — and I went ‘Oh what a mess it is!’ And what’s funny is, I’ve only seen myself do that twice, and the other one was in Sweden when I had to sing at the Nobel Prize ceremony for Bob. I was like, ‘What is it about Bob? It’s another fine mess he got me into!’”