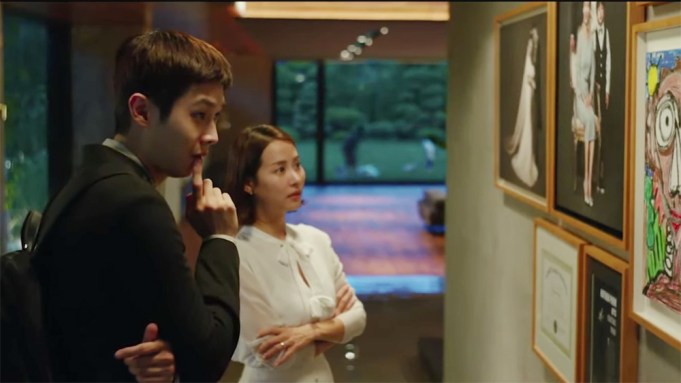 The trailer opens on the black comedy’s central family who live in poverty in a basement apartment, with the father (Kang-ho Song) flicking a bug from his family’s table. He says to leave the windows open as a fumigator passes by on street so they can get “free extermination.”

Things start to look up for the family, however, when the college-age son of the family, Ki-woo (Woo-sik Choi), is given the opportunity to take over his friend’s job as an English tutor for a wealthy family’s young daughter. He enlists his sister (So-dam Park) to help him forge documents to deceive the family into believing he’s qualified to teach.

Ki-woo goes on to meet the Park clan, including the naive mother (Yeo-jeong Jo), workaholic father (Sun-kyun Lee), artistic but odd young son and the daughter he’ll be tutoring. When the mother mentions her son needs an art teacher, Ki-woo has an idea: trick the family into thinking his sister is an art teacher so she can also earn an income.

The trailer then takes a grim and mysterious turn, with foreboding shots of the wealthy Park family and Ki-woo’s family, the entirety of which soon infiltrates the Park household as their various staff members. Blood splatters slices of white bread on a sunny outdoor table.