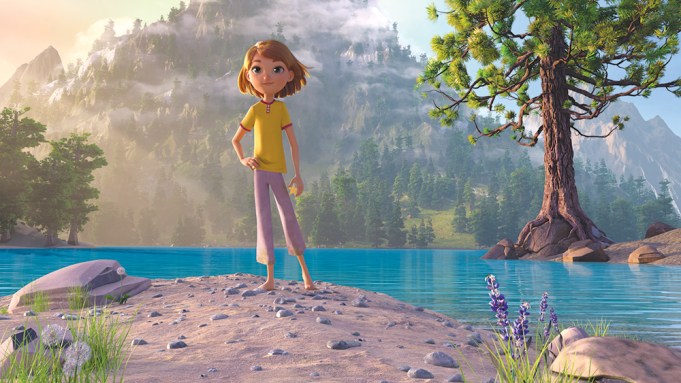 Multiple generations of moviegoers flipping through channels or scanning streaming titles have frozen at the sight of a desk lamp hopping across the screen, because it means a Pixar movie is about to play. Likewise, when a young boy lounging inside a crescent moon casts his fishing line into the clouds, you know DreamWorks Animation is about to deliver a family-friendly story. Paramount Animation now joins their ranks with its first-ever dedicated logo for the division, which is run by Mireille Soria.

Audiences are about to meet a character who will represent the Paramount Animation brand in film, TV and marketing spots. She’s a tween named Star Skipper, and she appears in a heightened version of the iconic Paramount logo: a snowcapped mountain surrounded by a forest and a serene lake. There’s some magic built in, however: The character skips a stone across the water, and it travels through the trees, into a green valley and up the mountain before exploding in the sky. There, it metamorphoses into a star.

We also caught up with Soria, who in only two years of stewardship of the label has ramped up production and will release four films through 2021.

In eight years, the division never had a logo. Why now?

[Paramount CEO] Jim Gianopulos’ vision for animation is huge, which is one of the reasons I’ve decided to come here. There had been some really great animation here before, but it wasn’t focused on or supported in this way. One of the goals from the very beginning was ‘Let’s do a logo.’ It took us a while, on top of our goal to make two movies a year and putting together our great team. We’ve landed on one, and I’m excited for the world to see it. You’ll recognize it as a Paramount logo, and it has its own voice, and it’s unique to the world of animation.

Was it a conscious choice to make the character female?

We wanted to put a character in there. We were inspired by the idea of stars and reaching for the stars. In our operation overall, the team that we’ve put together is a majority female team, so it captures the magic of what we’re going for in the division. It’s about dreaming big. When we thought about the character, we thought, why wouldn’t it be female? And we wanted a girl connected to nature, in who she is and how she looks.

You have strong numbers when it comes to hiring women, and many animation shops are run by women. How far along is the whole industry in terms of achieving gender equity?

It’s a challenge everyone has. Because it has not been tradition or convention, we have to find people who have the talent and ambition but need the support. Trust me, those people are out there. We learn from our mentors, including great men on our team, and I think our slate proves we have a real diversity of ideas. It’s a great time for animation. There are a lot of projects being done, and we all know each other: Melissa [Cobb] at Netflix, Kristine [Belson] at Sony Pictures Animation] and Margie [Cohn] at DreamWorks Animation.

How does Paramount Animation distinguish itself from its competitors?

We’re not looking to have a uniform look for the movies. We think the look should be defined by story and what it demands, and the vision of the talent leading it. The unifying concept we want is that they are top quality. [Audiences] should also leave feeling good about themselves. Guillermo del Toro always says that animation is a medium, not a genre. We believe that too.

Now that the merger with CBS is taking place, what does that mean for animation?

One thing [Viacom CEO] Bob Bakish has done is a breaking down of the silos so we can work together — doing “SpongeBob” with Nickelodeon is a great and obvious example [of synergy]. We have a project centered on “Mighty Mouse,” a hybrid we have
in development, which is owned by CBS. Yes, we’d like to do more.

Star Skipper will live in the logo, but will she ever break out into her own movie or series?

Our hope is all of our movies will be successful. We’ll wait and see if there are any changes with her as the movies grow. It’s a fun idea.