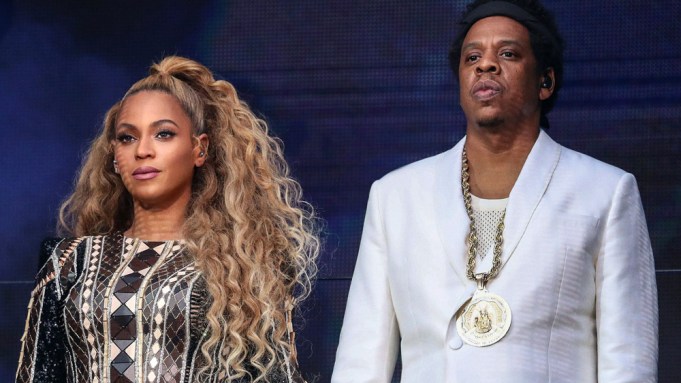 Each a cultural monolith in his/her own right, the husband-and-wife team dubbed “the most powerful black people in the country” by presenter Lena Waithe used the platform to rally Americans to protect their friends, family, and children, and love them “in their truest form,” said Beyonce.

Emotions ran high in the international ballroom of the Beverly Hilton Hotel, as Waithe and fellow presenters helped contextualize the value of Mr. and Mrs. Carter’s endorsement of queer identities.

Trans writer and director Janet Mock spoke of the significance of her casting in Jay-Z’s music video for “Family Feud,” in which director Ava DuVernay envisioned her as an architect of a new America, far in the future, where a woman like her held a seat at a table of power.

“It was a vital intervention to a worldwide audience that LGBQ people are worth being seen, heard, and affirmed,” said Mock, wiping away tears.

HIV activist Morris Singletary asked an audience, including Gwyneth Paltrow and emerging singer Lizzo, to imagine “if the world was one big Jay-Z and Beyonce concert? What a wonderful world this would be.” He said the inclusive nature of their shows see black and white, gay and straight fans celebrating alongside each other in a safe space. He also praised Beyonce’s famous, tireless work ethic as an inspiration for his own fight against HIV.

Beyonce’s former, longtime stylist Ty Hunter spoke of their meeting at the Houston Galleria in 1999, when her mother and Destiny’s Child style director Tina Knowles plucked him from retail and employed him on the girl group’s world tour.

Hunter said the couple was not in the room on Thursday “for attention, they are here because they believe in acceptance.” Hunter thanked Beyonce for teaching him never to compare himself to anyone else, and in an emotional moment, thanked Jay-Z for being a straight man “comfortable in his damn skin” who accepted him, and “lets other straight men know that this is the way to go.”

When finally taking the stage, Jay-Z spoke first about his mother Gloria, herself a GLAAD Award recipient last May. On his latest album, specifically the track “Smile,” Jay-Z shared her lifelong struggle to conceal her lesbianism in favor of her children and her culture.

“Mama had four kids, but she’s a lesbian. Had to pretend so long that she’s a thespian. Had to hide in the closet, so she medicate. Society shame and the pain was too much to take,” he raps on the track. In the room, Jay-Z said he was “following in her footsteps of spreading love and acceptance,” and thanked his mom for allowing him to tell her story.

In her introduction, Waithe perhaps said it best. She said “4:44” was an instant classic, but “Smile” made the work “revolutionary.” She called the song “a modern-day negro spiritual, reminding those in hiding there is still time to make their way to freedom.”

A flustered Beyonce took the mic and admitted to being “overwhelmed” by the outpouring from Mock and her fellow presenters. “We are here to promote love for every human being,” she said. She encouraged the room to look first to friends and family.

In perhaps the most revealing moment of the evening, Beyonce shared that her Uncle Johnny died of a struggle with HIV. Johnny contributed behind-the-scenes to Destiny’s Child and was a major influence on her and sister Solange, the singer said through tears. She called his loss was “one of the most painful experiences I’ve ever lived.”

Ending on a light note, Beyonce boiled down sexual orientation and the freedom to love to simple human rights. She referenced one of her most famous lyrics from the black female empowerment anthem “Formation,” wherein she pledges to wine and dine her partner after an intimate moment.

“Who you make love to and take that ass to Red Lobster? It’s your human right,” she said.

Before the presentation, “A Star Is Born’s” Shangella peformed a jaw-dropping lip-sync medley of Beyonce hits. The “RuPaul’s Drag Race” star received a standing ovation from the Carters and the rest of the packed ballroom. Beyonce, smiling and clapping, said to one of their tablemates, “That was so great.”