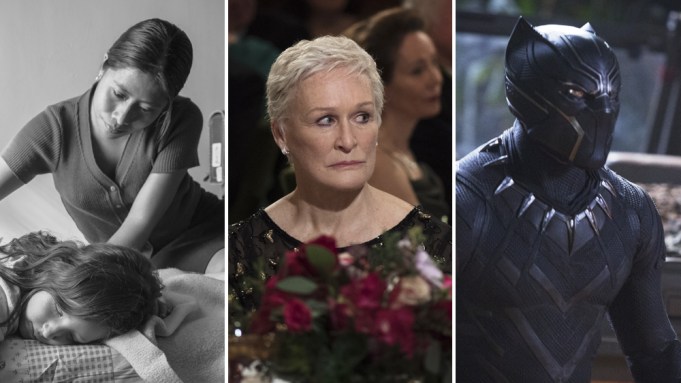 The 91st Academy Awards are just four days away.

This year’s broadcast, the first in decades without a host, should be a memorable one. For once, comic book movies such as “Black Panther” have been invited to the party and the crop of best picture contenders includes a number of blockbusters such as “A Star is Born” and “Bohemian Rhapsody.” That’s a change from past telecasts in which awards were frequently handed out to movies that were critically beloved, but little seen. It’s also the first time that Netflix, the streaming giant that’s upending the way people watch movies, has a chance to capture the top honor. The company enters the fray with 10 nominations for “Roma.”

Here’s a look at some of the big questions gripping the movie business as Hollywood gears up for awards night.

1. Can Netflix win the big prize?

The streaming giant has pulled out all the stops to nab an Academy Award for best picture for “Roma.” It hosted lavish parties, plied voters with Oaxacan dark chocolates and $175 coffee table books, and deployed awards whisperer Lisa Taback to make Netflix COO Ted Sarandos’ Oscars night dreams a reality. It helps that in “Roma,” a black-and-white tone poem about director/writer/producer/cinematographer/(key grip?) Alfonso Cuaron’s childhood, it boasts a contender that is a master class in moviemaking.

But some voters still view Netflix as an existential threat to cinemas, a fear that a cursory “exclusive” theatrical run for “Roma” did little to mitigate. At the same time, Netflix, which has been bolstering its ranks as it prepares to do battle with Disney’s new streaming service, has become a major employer in Hollywood. All those paychecks could win over some skeptics. Will that (plus a $25 million-plus marketing blitz) be enough to make the company the first digital player to nab the glossiest prize in movies?

2. Will seven times be the charm for Glenn Close?

After decades of memorable performances, it’s hard to believe that Glenn Close has somehow been overlooked by the Academy. And yet boiling bunnies (“Fatal Attraction”), gender bending (“Albert Nobbs”), and parenting Robin Williams (“The World According to Garp”) somehow wasn’t enough to earn an acting Oscar for this screen icon. With this, her seventh nomination for a stunning turn as a long-suffering spouse in “The Wife,” will Close finally get the recognition she deserves? Odds-makers say yes, but she faces stiff competition from Olivia Colman (“The Favourite”) and Lady Gaga (“A Star is Born”).

Comic book movies have dominated multiplexes for the past two decades, but they’ve been virtually ignored by the Oscars. Aside from Heath Ledger’s posthumous Oscar for “The Dark Knight,” it’s a genre that has been shut out of major prizes. That could change. Two Marvel movies, “Black Panther” and “Spider-Man: Into the Spider-Verse,” are up for major prizes at this year’s Academy Awards. “Black Panther” could score an upset in the best picture race, while “Spider-Verse” is the favorite to win a best animated feature statue.

4. How political will the Oscars get?

Hollywood sure hates Donald Trump and awards shows often present a tempting platform for celebrities to sound off about the 45th president. And it’s not just “the Donald” that’s on the movie business’s mind. From global warming to Time’s Up, there are plenty of political causes that are galvanizing entertainers. Add to that, a crowded Democratic Party presidential primary field and the chance to weigh in on the events of the day may be all-too-enticing. There are differing opinions about whether or not political jabs translate into lower ratings, but it’s a good bet that ABC, the network airing the telecast, would prefer to keep controversy to a minimum as it looks to bolster viewership. If that happens, it could be a pretty pallid broadcast. After all, from Meryl Streep lambasting our Tweeter-in-Chief at the Golden Globes to Patricia Arquette using her Oscar acceptance speech to launch an impassioned plea for pay equity, politics has given awards shows some of their most “viral” moments.

It’s been one bumpy ride to Oscars glory for the dramedy about the unlikely friendship between a bigoted bouncer (Viggo Mortensen) and a black jazz musician (Mahershala Ali). “Green Book” has careened from one controversy to another. In the three months since it opened, the film has contended with outrage over the anti-Muslim comments of its producer Nick Vallelonga, fierce debates about its historical accuracy, a furor over one of its star’s use of a racial slur, and the embarrassing resurfacing of articles documenting director Peter Farrelly’s habit of flashing actors back when he was making gross-out comedies. And yet despite all the scandals and setbacks, Ali seems likely to pick up his second Oscar for supporting actor and the film could upset “Roma” in the best picture race. If it nabs the top prize, expect Spike Lee to have something to say about it.

It’s been nearly three decades since the Oscars went host-less. In the ensuing years, the Academy has employed Whoopi Goldberg, Ellen DeGeneres, Hugh Jackman, Steve Martin, Billy Crystal, and even the late lamented pairing of Anne Hathaway and James Franco to welcome viewers to Hollywood’s biggest night. The concept of a broadcast without a host was so jarring that ABC was forced to bat down chatter that it would secretly deploy Goldberg to kick off the show and keep things running between commercials.  There’s reason to be worried. The last time the Oscars jettisoned an emcee was the 1989 telecast, which has gone down in infamy as night Rob Lowe boogied with Snow White, pleasing no one save for a few patent lawyers at Walt Disney. This year, the rumor du jour is that the show will turn to Queen and Adam Lambert to kick things off. But will a spirited rendition of “We Will Rock You” fill the void left by an opening monologue?