Continue to Variety SKIP AD
You will be redirected back to your article in seconds
Feb 24, 2019 5:15pm PT 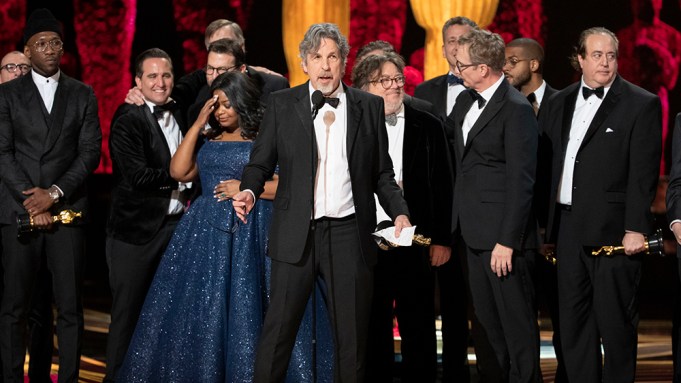 “Green Book,” the story of the unlikely friendship between a bigoted bouncer and a virtuoso black musician, was named the best picture of the year at the 91st Academy Awards on Sunday. The Universal Pictures release beat back a string of formidable challengers to nab the top honor, including Netflix’s “Roma,” a critically adored black-and-white drama that spent more than $25 million in its quest for Oscars.

Not that “Roma” went home empty handed. The meticulously made Mexican drama won best director for Alfonso Cuaron at the Oscars, adding to its win for foreign language feature Oscar and cinematography. Netflix also earned a best documentary short award for “Period. End Of Sentence.” “Bohemian Rhapsody,” a musical biopic about Freddie Mercury, won a leading four Oscars, including a best actor prize for Rami Malek’s portrayal of the Queen frontman.

It was an awards show that was light on hosts, going emcee-less for the first time in decades, but heavy on inclusion and politics. A record number of black performers and women were honored over the course of the three-hour show.

In his acceptance speech, Malek noted that he was the son of Egyptian immigrants, in an experience that in some respects mirrored those of the rock icon he plays.

“We made a film about a gay man, an immigrant, who lived his life just unapologetically himself,” he said. “The fact that I’m celebrating him and this story with you tonight is proof that we’re longing for stories like this.”

Olivia Colman upset the heavily favored Glenn Close to nab best actress for her role as a mercurial monarch in “The Favourite.” Colman was gracious in victory. “Glenn Close, you’ve been my idol for so long and this is not how I wanted it to be,” she said. With her loss, Close now has seven nominations and no wins.

Regina King won best supporting actress for her role as a fiercely protective mother in “If Beale Street Could Talk,” while “Black Panther” and “Bohemian Rhapsody” picked up important technical honors. In a teary speech, King thanked the writer James Baldwin, whose novel inspired the film, as well as her mother. “It’s appropriate for me to be standing here, because I’m an example of what it looks like when support and love is poured into someone,” said King, adding “God is good, all the time.”

“Green Book’s” Mahershala Ali picked up his second Academy Award for best supporting actor. He was honored for his portrayal of pianist Don Shirley and previously won for his performance as a sympathetic drug dealer in “Moonlight.” Ali said the role was a demanding one, telling the crowd that “trying to capture Dr. Shirley’s essence pushed me to my ends.” Not everyone has been pleased with the finished product. “Green Book” has been criticized as inaccurate by Shirley’s family, with the musician’s surviving brother, Dr. Maurice Shirley, calling the film a “symphony of lies.” The film also picked up a best original screenplay Oscar, bringing its total to three wins. Its success came despite a slew of controversies. The litany of PR headaches involved everything from its director Peter Farrelly’s past history of exposing himself to actors when he was making gross-out comedies in the 1990s to a series of anti-Muslim tweets written by the movie’s producer Nick Vallelonga.

In lieu of an opening monologue, Queen and Adam Lambert got the evening started with an amalgam of “We Will Rock You” and “We Are the Champions” that leaned heavily on smoke machines and cascading lights. The audience of well-heeled movie-makers and executives clapped along, at times awkwardly. There were also performances by Bette Midler as well as Lady Gaga and Bradley Cooper, with the latter two singers ending their set with the kind of tender gaze that’s the stuff of memes.

The Oscars were handed out at a time of tectonic change in the entertainment industry. It’s an era of mergers, consolidation, and emerging technology that is upending traditional ways of doing business. Twentieth Century Fox, which has 20 nominations, the most of any studio, is staring into an uncertain future. Much of the film and television giant has been sold to the Walt Disney Company. Thousands of people are expected to be laid off as a result of the union.

In addition to Malek’s prize, “Bohemian Rhapsody” earned sound mixing and sound editing Oscars, as well as a film editing statue. The musical biopic was one of the biggest hits of 2018, racking up nearly $850 million worldwide, but it has also been dogged by controversy. Its director, Bryan Singer, was fired from the film after he failed to show up to the set. He was replaced by Dexter Fletcher, but is still credited with directing the picture. But that wasn’t the end of the bad headlines for “Bohemian Rhapsody.” In January, Singer was the subject of a deeply reported article in the Atlantic in which he was accused of sexually assaulting and sleeping with numerous underage boys. Singer denies the allegations.

Major studios have largely shied away from the darker, contemplative dramas that are favored by awards voters. Instead they are concentrating on producing superhero movies. In recent years, popular tastes and those of the Oscars have deviated wildly, with voters rewarding indie fare such as “Moonlight” and “Birdman” over tentpole productions such as “The Avengers.” This year’s crop of contenders was different. “Black Panther” became the first comic book movie to score a best picture nomination and “Spider-Man: Into the Spider-Verse” won the best animated feature prize. “Black Panther” may have lost out to “Green Book” for the top honor, but it did well in below-the-line categories, earning best costume, score, and production design statues.

Three years after the #OscarsSoWhite movement exposed the pain felt by the Academy’s penchant for overlooking performers and artists of color, the winner’s circle was far more inclusive. Two black actors, Ali and King, were honored for their supporting turns and Spike Lee, the legendary director of “Do the Right Thing,” earned his first statue for co-writing “BlacKkKlansman.” “Black Panther’s” Ruth Carter became the first black woman to win a costume design Oscar, while her colleague Hannah Beachler is the first black person to win a production design Academy Award.

The show made several political detours, though it was less overtly strident than in previous years. Without mentioning President Trump by name, some presenters still sought to draw a distinction with his immigration policies and treatment of the press. While presenting the foreign language award, Javier Bardem said, “there are no borders or walls that can restrain ingenuity or talent,” an apparent reference to Trump’s oft-discussed border wall. Celebrity chef and hunger activist José Andrés also used his moment on stage to praise immigrants and women as forces that “move humanity forward.”

Lee was more explicit. “The 2020 presidential election is around the corner,” he said. “Lets all mobilize…make the moral choice between love and hate. Lets do the right thing.”

“A Star is Born,” which had been an early awards season favorite, only to see its Oscar chances flag during a grueling campaign, did win a best song trophy for Lady Gaga’s anthemic “Shallow.” “Free Solo,” a look at rock climber Alex Honnold’s attempts to summit El Capitan, picked up a best feature documentary prize after becoming an unexpected box office hit.

The 2019 broadcast threatened to be overshadowed by offstage drama. In recent months, the Academy has careened from one disaster of its own making to another. The litany of missteps include a short-lived plan to hand out a prize for the best blockbuster release, an aborted decision to only film a handful of performances of the best original song nominees, and a hastily abandoned move to hand our certain prizes, such as those for editing and cinematography, during commercial breaks.

It also stumbled in its selection of Kevin Hart as host. The comic got in hot water hours after he was announced as emcee when social media platforms began recirculating previous homophobic comments he had made. Hart stepped down as the firestorm over his past remarks and half-hearted apologies intensified. The Academy was unable to find a replacement and this year’s telecast was the first host-less broadcast since the 1989 ceremony — an infamous show that featured Rob Lowe dancing to “Proud Mary” with Snow White.

Instead, the telecast relied on a series of A-list presenters to keep things moving. “We are not your hosts, but we’re going to stand here a little too long so that the people who get USA Today tomorrow will think that we hosted,” Tina Fey quipped as she handed out the supporting actress award alongside Amy Poehler and Maya Rudolph.

Although few of their initiatives survived the planning stages, the show’s producers were motivated to experiment because ratings for the Oscars are in free-fall. Last year’s broadcast was seen by an average of 26.6 million viewers, the lowest viewership in decades.

One thing that could bolster ratings: the Oscars recognized movies that people have actually enjoyed. In recent years, the Academy has nominated movies that were more loved than seen. This year’s best picture nominees have collectively grossed $1.3 billion at the domestic box office, the highest-grossing group of contenders in nearly a decade. That’s mostly thanks to “Black Panther,” Marvel’s more inclusive approach to the superhero genre that amassed over $700 million in North America alone.

Of course, some traditions are tough to break. “Green Book,” the eventual winner grossed $144 million globally, a solid result, but one that pales in comparison to “Black Panther” or “A Star is Born.”