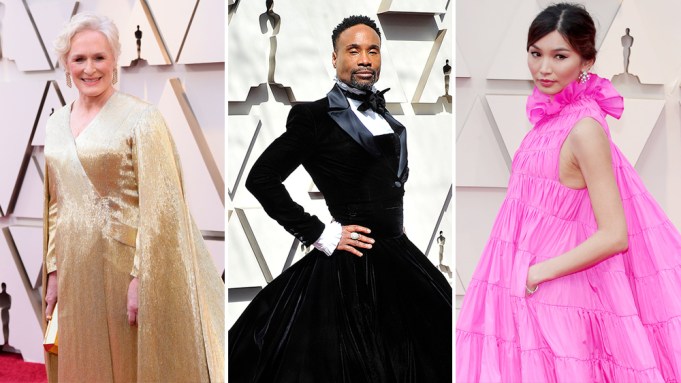 Pantsuits ruled this year’s Academy Awards, adding a touch of comfort to a carpet filled with metallic shimmers, bright pinks and everything in between.

Kicking off the red carpet was “Pose” star Billy Porter, sporting a custom, black-velvet Christian Siriano dress and a matching bolero jacket. The floor-length gown was also one of the evening’s many gender-fluid looks, which included “Eighth Grade” actress Elsie Fisher’s own tuxedo twist. Her all-black suit featured a matching pair of reflective boots alongside a complementary metal neckpiece and a simple hair clip nestled in the corner of her blonde locks.

Pink was another prominent carpet theme, with actresses Linda Cardellini, Gemma Chan, Helen Mirren and Angela Bassett all wearing their own fuchsia gowns alongside presenter Kacey Musgraves and Netflix’s Marie Kondo who wore softer hues of the same color.

As for the Oscar’s male attendees, velvet was the trend of the evening with stars Michael B. Jordan, Jason Momoa, David Oyelowo, Brian Tyree Henry, Chris Evans and Stephan James who joined Porter in similarly luxurious looks colorful shades from blush to wine to Dutch blue.

Earlier in the evening, Spike Lee turned heads in a bright purple suit accessorized with both a gender-fluid necklace symbol and a pair of “love/hate” rings from his iconic film “Do The Right Thing” – an homage to both Radio Raheem and the legendary singer-songwriter Prince.