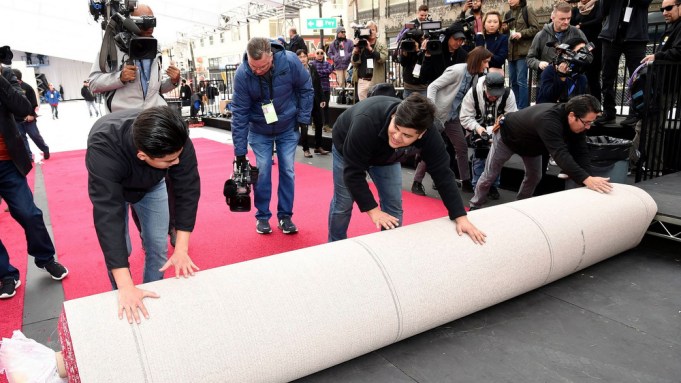 At least the weather will be sunny for Sunday afternoon’s Oscars ceremony following one of the stormiest —  and strangest — awards seasons in memory.

Expectations have been turned upside down in key categories amid a historic lack of consensus among guild and critics groups. The 91st Academy Awards will be the first in three decades without a host. The show is produced by Donna Gigliotti and Glenn Weiss, with Weiss also serving as director.

The show begins at 5 p.m. PST Sunday at the Dolby Theatre in Hollywood with Oscars presented in 24 categories. ABC will televise the ceremony in the U.S., where producers are hopeful that the broadcast won’t see the same kind of decline as last year’s 16% plunge to 26.5 million, the lowest U.S. viewership in Oscar history.

Though there was rain — and snow – in Los Angeles earlier this week, the Oscars ceremony should unfold in chilly but dry weather with highs near 63 in the afternoon, dropping to 43 at night.

Traffic in Hollywood will be tightly controlled Sunday, as the LAPD works to wrap the Dolby in multiple cordons of security, according to Public Information Officer Sal Ramirez.

“We never give out numbers but it’s not going to be significantly different from a year ago,” he added. “We are going to deploy enough officers to ensure the safety of all.”

Nearly a mile of Hollywood Boulevard will be closed, from Cahuenga Boulevard to La Brea Avenue. The Red Line stop at Hollywood and Highland will also be closed all day on Sunday, keeping passengers outside the security perimeter.

The awards season has lifted the fortunes of “Roma,” “Bohemian Rhapsody” “Green Book,” “Black Panther” and “Can You Ever Forgive Me?” and put a dent in the hopes for “A Star Is Born” and “Vice.” But pundits remain uncertain as to many of the outcomes, based on voting by the 7,902 members of the Academy of Motion Picture Arts and Sciences.

There’s no clear consensus in the Best Picture category, where “Roma” and “Green Book” appear to be the favorites. “Green Book” has been hit by several off-screen controversies; a foreign language film such as “Roma” has never won best picture, and its release via tech giant Netflix, which assiduously withholds box-office data, has pitted it against traditionalists. A best picture win for “Black Panther” is also a possibility, given its Screen Actors Guild Award for outstanding ensemble cast.

Additionally, the massive popularity of “Black Panther,” “Bohemian Rhapsody” and “A Star is Born” may provide enough of a draw the goose the ratings upwards.

But the dominant story during the season has often not been the movies in contention but the mis-steps of AMPAS itself. “It’s been an interesting awards season, all right, but for the wrong reasons,” one member sighed.

The Academy proposed in August that the 91st Oscar include a new popular film category — an ill-defined notion that was tabled a month later after being widely derided. It offered the hosting gig to Kevin Hart, who bailed out two days later due to the outcry over his old homophobic tweets. So this Oscarcast may provide some future guidance as to whether a host is really needed to move the festivities along.

The Academy also decided in August that the Oscar producers would have to keep the show at a three-hour running time, a serious challenge given that last year’s show ran nearly four hours. On Feb. 11, the Academy revealed a shortened presentation process that would involve handing out four of the 24 trophies during commercial breaks. The idea produced such strident protests from directors, actors, cinematographers and editors that AMPAS ditched the plan four days later.

A month before the show, it was revealed that only two of this year’s five Oscar-nominated songs would be performed live on the Academy Awards show — another time-saving step that was met with plenty of protests and subsequently abandoned.

Expect a blizzard of social media posts dissecting how well it all came together during and after the broadcast, which ends sometime around 8 p.m. PST on Sunday.