‘Once Upon a Time in Hollywood’ Launches With $5.8 Million on Thursday Night 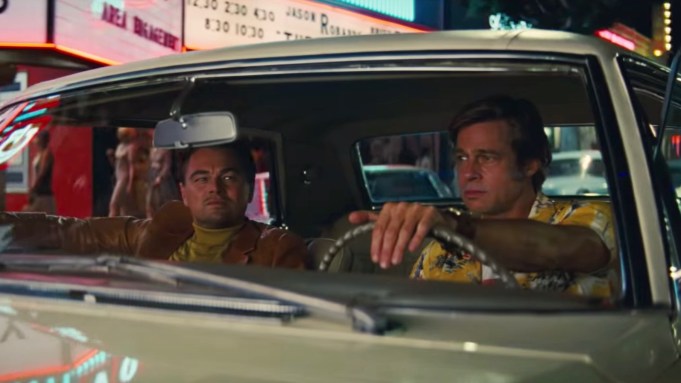 Quentin Tarantino’s “Once Upon a Time in Hollywood” has opened with a solid $5.8 million at 3,318 North American locations in Thursday previews.

Sony’s much-anticipated comedy drama, starring Leonardo Dicaprio and Brad Pitt, will expand to 3,659 sites against the second weekend of Disney’s blockbuster remake of “The Lion King.” “Once Upon a Time” is promising R-rated counter-programming and should deliver a $30 million opening weekend, according to forecasts.

Reviews have been strong with a current 88% score on Rotten Tomatoes. DiCaprio portrays an aging actor with Pitt as his longtime stunt double in a drama set in 1969 Hollywood with Sharon Tate (Robbie) moving in next door to the home of DiCaprio’s character prior to the Manson family murders. Sony spent $90 million in production fees, a figure that doesn’t include global marketing costs.

Lionsgate’s “John Wick: Chapter 3” scored a similar Thursday preview total with $6 million on its way to a $56 million opening weekend on May 17-19. Tarantino’s “Inglourious Basterds” scored the biggest opening among his eight previous films with $38 million in 2009. The director’s “Django Unchained” is his biggest box office success to date with $425 million worldwide.

“The Lion King” is expected to once again dominate in North America. Jon Favreau’s photorealistic update raked in a massive $192 million during opening weekend, the best start among Disney’s remakes and the second-biggest domestic debut of the year. If “The Lion King” sees a hold similar to the other Disney re-imaginings such as “Beauty and the Beast” and “Aladdin,” the musical could collect between $87 million and $100 million during its second weekend. Only seven films have taken in more than $90 million in their second weekends.

“The Lion King” has already improved the overall 2019 North American box office, which reached $6.64 billion on July 24 and now trails last year’s take by 7.1%, according to Comscore. The summer box office has hit $3.12 billion, a 1.9% decline. Paul Dergarabedian, senior media analyst with Comscore, said “Once Upon a Time in Hollywood” should show staying power in coming weeks.

“Though the lion will continue his reign as the king of the box office, a brilliantly epic, true original from the imagination of auteur Quentin Tarantino will bring enthusiastic film fans and movie buffs to the multi-plex this weekend and beyond,” he added.

Tarantino produced “Once Upon a Time” with David Heyman and Shannon McIntosh. Georgia Kacandes, YU Dong and Jeffrey Chan serve as executive producers.