‘Once Upon a Time in Hollywood’ Billboard Vandalized to Blast ‘Pedowood’ 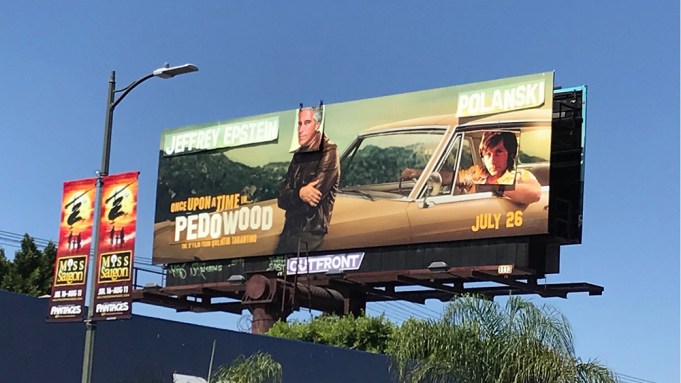 A Los Angeles billboard for Quentin Tarantino’s “Once Upon a Time in Hollywood” has been hijacked to replace the faces of stars Brad Pitt and Leonardo DiCaprio with those of Roman Polanski and Jeffrey Epstein, respectively, blasting “Pedowood” in place of Hollywood.

The billboard, located at Pico and La Cienega, was vandalized ahead of the film’s July 26 release. A street artist who goes by the name of Sabo has taken credit for the alteration on his website. He has also taken credit for a bench advertisement featuring Epstein instead of DiCaprio and Woody Allen instead of Pitt, as well as a poster with congressman Adam Schiff’s face placed on Pitt’s character next to Epstein again as DiCaprio’s character. (Schiff earlier this year was the target of an entirely unsupported allegation by a right-wing commentator, who admitted he lied about calling Schiff a “pedophile” because he didn’t like the Democratic congressman.)

Allen, Epstein and Polanski have all been hit with allegations of sexual abuse involving a minor. Allen was accused of molesting his adoptive daughter, Dylan Farrow, when she was 7 years old. Hollywood financier Epstein is currently in jail awaiting trial on charges of sex trafficking of minors. Polanski was charged for drugging and raping a 13-year-old girl in 1977 and accepted a plea deal for a lesser charge of unlawful sexual intercourse.

This is far from the first time Sabo has vandalized in a movie advertisement to make a statement. In an advertisement for the 2017 film “The Post,” for example, the conservative street artist tagged the words “She knew” next to star Meryl Streep’s face, implying that she was complicit in producer Harvey Weinstein’s alleged sexual misconduct. Ahead of last year’s Academy Awards, he also doctored three billboards in the style of “Three Billboards Outside Ebbing, Missouri” to read “And the Oscar for biggest pedophile goes to…,” “We all knew and still no arrests” and “Name names on stage or shut the hell up!”