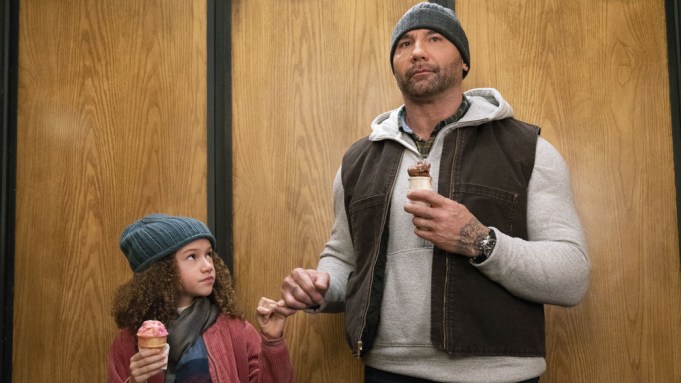 Dave Bautista finds himself forced to teach spycraft to a 9-year-old girl in the first trailer for STXfilms’ comedy “My Spy.”

Bautista plays a tough-as-nails CIA operative who admits, “I’m just not that good with people, but there is one thing I’m good at,” followed by explosions and mayhem.

His superior (Ken Jeong) notes that the assignment was to gather intelligence, then adds, “but that’s kind of difficult now that you’ve killed everyone.”

Bautista is given a last chance to keep his job, and ordered to go undercover and surveil a family. But their daughter, portrayed by “Big Little Lies” actress Chloe Coleman, foils that plan by discovering the hidden cameras. She then blackmails him into teaching her how to be a spy — sealed with a pinky promise.

Coleman proves adept at the tricks of the trade, including beating a lie detector test and creating distractions, such as overturning a goldfish bowl.

STXfilms dropped the trailer on Thursday, a day after unveiling footage at CinemaCon in Las Vegas. The film is being directed by Peter Segal (“Get Smart”) from a script by the sibling writing team of Jon and Erich Hoeber (“Red”).

Good Fear’s Chris Bender and Jake Weiner are producing the project alongside MWM Studios, Bautista, Segal, Jonathan Meisner, and Gigi Pritzker. Rachel Shane and Adrian Alperovich serve as executive producers, while Stacy Calabrese is a co-producer, all on behalf of MWM Studios.