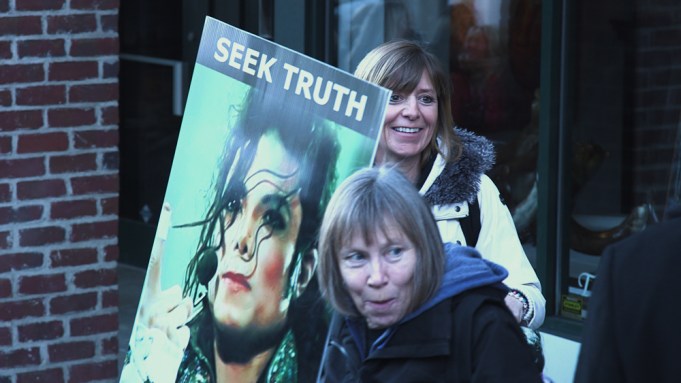 Police outnumbered protestors at the world premiere of “Leaving Neverland,” a new documentary that examines the child sexual abuse allegations against Michael Jackson that debuts at the Sundance Film Festival.

As press and attendees flooded into the Egyptian Theatre, they walked past two women holding placards that read “Seek Truth.”

“I’m here to stand up for him,” said Brenda Jenkyns, a fan of Jackson’s who made the trek to Park City, Utah, from her home in Calgary, Canada. “It’s important that people look at the facts, because the truth isn’t black and white.”

Jenkyns said she first discovered the pop star by following the coverage of his 2009 death and was impressed by his commitment to humanitarian causes. “Leaving Neverland,” a four-hour documentary by Dan Reed, paints a very different picture of the singer as a man who used his celebrity to sexually abuse and exploit children. The movie includes interviews with Wade Robson and James Safechuck, two men who claim they were sexually abused by Jackson when they were children. Robson’s account is controversial because he previously said under oath that Jackson never behaved inappropriately with him before changing his account in a 2016 lawsuit. Safechuck filed a separate suit in 2014.

“This film is not about giving a voice to a victim,” said Catherine Van Tighem, a fan who came to Sundance from Alberta, Canada. “The people that are featured in this film have already had their day in court and they have been legally denied. They were seeking financial gain and the case was dismissed … if Michael were alive today, this film would be considered defamation.”

Jackson was accused of molestation and was acquitted in a 2005 trial. He reached a financial settlement with another accuser, Jordan Chandler, in 1994. Both Robson and Safechuck’s lawsuits were dismissed, with the judge saying they had filed too late after the singer’s 2009 death.

The sparsely attended protest was something of an anticlimax, particularly after Park City police told reporters they were increasing staffing in anticipation that Jackson’s fans would be out in force.

“Tensions are higher for this movie than anything I’ve ever seen at Sundance before,” a law enforcement source told Deadline earlier this week.

Instead, it was left to the two women from Canada to come to Jackson’s defense. A swarm of cameras surrounded Jenkyns and Van Tighem, and at one point a reporter was overheard asking where the protest was.