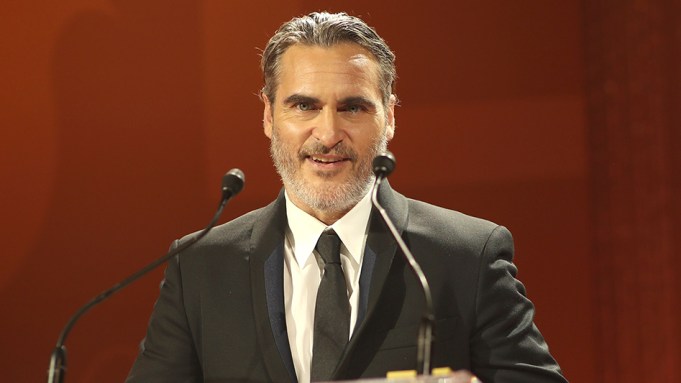 The Toronto Film Festival rolled out the red carpet Monday night for its inaugural TIFF Tribute Gala, a fundraiser and awards-season launcher that feted a select group of cinema changemakers and included both inspiring and surprising moments.

Held at the historic Fairmont Royal York Hotel, the packed event was hosted by Toronto thesps Sarah Gadon (“American Woman”) and Stephan James (“If Beale Street Could Talk”), both alumni of TIFF Rising Stars, one of many career-boosting programs the not-for-profit TIFF puts on year round.

“I am honored to make a great artist greatly uncomfortable,” Crowley joked, referring to the legendary cinematographer’s dislike of the spotlight.

Deakins — whose work, like that of his fellow honorees, was showcased in a montage of iconic shots and scenes — told the crowd he’d only feel comfortable if his 40 to 50 regular crew members, including his wife, were standing beside him on the stage.

“Roma” star Yalitza Aparicio presented the Tribute Impact Award to Participant Media, pointing to its unity of “art and activism” in more than 100 feature and documentary films produced over the past 15 years.

Accepting the award on behalf of the company, which was founded by Canadian Jeff Skoll in 2004, Participant CEO David Linde gave a shout-out to Thomas Balmes” Toronto-premiering doc “Sing Me A Song,” which examines the transformative impact of the Internet on a young Buddhist monk in Bhutan, as well as Canadian film distribution and activist partners, and colleagues in the room.

“O Canada,” Streep sang, plucking the line from Joni Mitchell’s “A Case of You” before expressing her gratitude to several Canadian luminaries, as well as the festival, which she lauded for its “real intention” to frontline women directors and women’s stories.

After a day of interviews, Streep said the most common question is, as always, how she picks scripts. “Usually it’s because of the people,” she said. “And when armed with material that’s compelling you have to ask yourself — does this help? Does this need to be in the world?

“Every artist here has made a choice, has decided to contribute, and this festival is moving the needle forward with its intention.”

Songwriter David Foster, the subject of Barry Avrich’s Toronto-premiering documentary “David Foster: Off the Record,” received his Special Tribute Award by, in true Canadian fashion, poking fun at himself (his three Best Original Song Oscar “losses”) and tinkling the ivories.

Direct from the Toronto premiere of “The Joker,” Joaquin Phoenix unexpectedly took the stage, prompting Willem Dafoe, in the middle of his intro, to invite Phoenix to fact-check the remarks.

Accepting the Tribute Actor Award, Phoenix said the clip montage made him think of all the people who helped and supported him in his acting career, which he began at age eight, in particular his family: “My mother is a constant source of inspiration, and everything I do, I do for her.”

Diop said the award,”reconnects various histories” and “reaffirms the memory of a woman who, in 1919, was considered the most famous women in the world,” referring to Pickford’s role in establishing United Artists in partnership with three men.

Its presenter, filmmaker Guillermo del Toro, encouraged the “wise disobedience” of New Zealand actor and filmmaker Taika Waititi (whose “Jojo Rabbit” premiered in Toronto Sunday), who took del Toro at his word in accepting the award with a hilarious snapshot of his early life, before underlining the importance of filmmakers from indigenous communities being able to tell their stories in their own way.