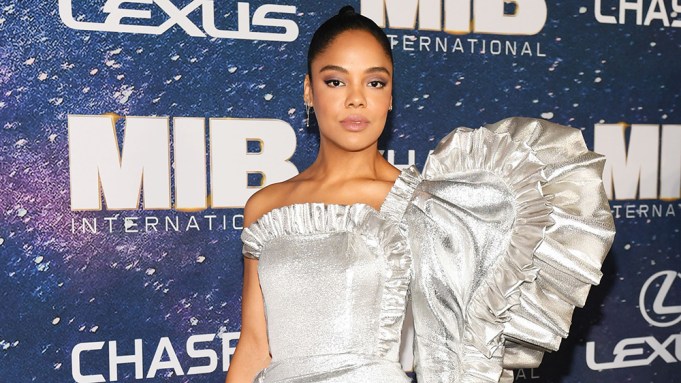 Tessa Thompson takes on her first leading role in a major blockbuster film with “Men in Black: International” this weekend, and the actress — who has been an outspoken activist for representation and inclusivity in Hollywood — is hoping the industry takes notice.

“There have always been women inside of the ‘Men in Black’ universe, they just have never been at the forefront of any of these stories,” Thompson says of the franchise, which was originally toplined by Will Smith and Tommy Lee Jones, starting with the first film in 1997. “International” marks the fourth film in the “Men in Black” universe.

“My hope is that we can get to a space inside of Hollywood where it’s not noteworthy that a woman should be topping a studio film. Unfortunately, it’s still something that we feel we have to acknowledge and congratulate because it just happens not frequently enough,” Thompson told Variety at Tuesday night’s New York City premiere of “Men in Black: International,” adding, “My hope is that a film like this helps us get there.”

When Thompson got out of her car to hit the black carpet, the actress says the first person she saw was a little girl dressed up in a black suit and sunglasses who told her how much the movie means to her. The moment draws similarities to Gal Gadot’s turn as Wonder Woman, which inspired a new generation of girls to grow up believing they can be superheroes, too. Of course, “Wonder Woman” went on to become a major box office success, making more than $821 million worldwide with a sequel coming in 2020.

Thompson stresses that she doesn’t want to inspire only women, but all theater-goers.

“The truth is, so many women have asked me — and men, too — have said, ‘What does it mean that a whole generation of young girls can see themselves in this film?’” Thompson says. “That’s significant…But I also think it’s important that young boys, folks that are gender queer, non-binary get to see me in this space because we just need more representation. It’s important to go into a cinema and to relate to a protagonist who doesn’t look like you, who doesn’t have your particulars. I think that’s what movies are designed to do, is to make us more empathetic and compassionate towards the other, and we have never needed that more — certainly in American history, but I think in a global sphere. That’s always what I want to do on film.”

Thompson shares with screen with her “Avengers” castmate, Thor, a.k.a. Chris Hemsworth, who praised his co-star at Tuesday evening’s premiere at AMC Lincoln Center in Manhattan, stating that he’d love the opportunity to star in a third franchise alongside Thompson following the Marvel movies and “Men in Black.”

“We’ve just done a three-week press tour and have been talking about that a lot — just what a joy it is and what a benefit it is to have a preexisting friendship and not to spend half of the movie-shooting experience getting to know each other or find a rhythm,” Hemsworth tells Variety. “She’s just one of my favorite people. She’s so talented, but has a great sense of fun on a set. That’s why I became an actor, was to have fun. It wasn’t to take it too serious. So it’s nice to have a partner in that action.”

When asked why the film is called “Men in Black,” given that Thompson is one half of the starring duo, the actress admits she doesn’t mind the title because it holds the brand equity of a well-known franchise. “My presence in it because I’m a woman shouldn’t diminish the fact that we’re making a movie very much in the same tone and style as the original films,” she says.

However, the film includes very specific language that points to the irony of the male-focused title, and hopefully points to the future of female progress in Hollywood.

“Emma Thompson has a brilliant quip in the movie,” the other Thompson explains, “where I say ‘Men in Black’ because I’m confused that that is the title of the organization, and she goes, ‘I know, I’ve had the conversation, it’s taking time.’ And I think that what she speaks to, which is funny but true, is that change happens sometimes faster than we have language to describe what changed has occurred, in so far as we have certain institutions that have antiquated ways of working — Hollywood is certainly one of them — where we don’t have the infrastructure to support the change that is actually happening.”

Thompson teases that if more “Men in Black” movies are made with her and Hemsworth, perhaps the film title will evolve. “Maybe that will change,” she says.

Referring to her character, Thompson adds, “Certainly, I think if Agent M sticks around the organization long enough, she will probably push some buttons to make change, and frankly, that’s the only way that things change, is people on the inside that have a real stake, really calling the institutions out.”

Producers Walter Parkes and Laurie MacDonald, who worked on all three original “Men in Black” films, note that bringing on a female lead was not a forced decision, but rather based on storytelling around a young girl who grows up to be Thompson’s character. In fact, the married producing duo reveals that an earlier version of the fourth “Men in Black” script went through a complete re-write, but always had a starring female role.

“It was very important to us. We’ve come to expect, as we should, that we have great female leads in these films,” MacDonald says. “It really was invigorating creatively for us to create that character and gave a really interesting dynamic with Chris…it was natural.”

“We were very lucky because these things take quite a while to figure out and work with writers and actually put together,” Parkes says. “And what’s so extraordinary is that if you look over the last two or three years, starting with Gal Gadot in ‘Wonder Woman’ and ‘Captain Marvel’ and ‘Black Panther,’ we’re sort of at a part in Hollywood where it really doesn’t matter. It’s a very inclusive thing, as long as the character is interesting and the movie is good…What is wonderful is that it’s normal and right that one of our leads would be a female.”

While “International” has progressed to this era of more inclusive Hollywood storytelling, the producers say the combination of sci-fi and comedy remains the same. Another similarity to the original “Men in Black” trilogy? You might just catch a glimpse of Smith and Jones.

A cameo appearance was never seriously discussed, the producers reveal to Variety, but there is a sighting of the original “Men in Black” stars — if you can catch it.

“If you look closely in the background of several shots in Liam Neeson’s office, you might see a little homage to them,” Parkes teases, to which MacDonald adds, “There’s a secret in our production design.”