‘Men In Black: International’ Taking in $26 Million Amid Franchise Fatigue 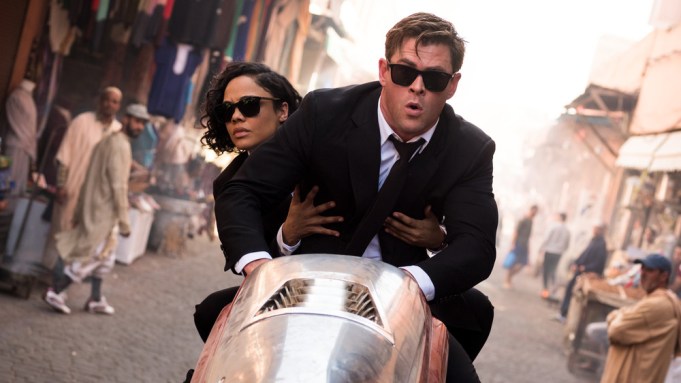 North American moviegoers spurned sequels this weekend with Sony’s “Men in Black: International” heading for a modest $26 million debut while “Shaft” will finish with a dismal $7.3 million in seventh place.

“Men in Black: International,” the fourth iteration of the sci-fi comedy franchise, is performing under expectations, which had been in the $30 million range at 4,224 locations. The three previous “Men In Black” films, starring Will Smith and Tommy Lee Jones, all scored North American debut weekends of more than $50 million in 1997, 2002 and 2012.

“Men in Black: International” stars Chris Hemsworth and Tessa Thompson as the black-suited agents dealing with a baffling series of alien attacks against Earth. Reviewers have been unimpressed, giving the film a 25% score on Rotten Tomatoes.

“Men in Black: International” takes place in the same universe as the previous trilogy, with Emma Thompson reprising her role as Agent O. Kumail Nanjiani, Rebecca Ferguson, Rafe Spall and twins Laurent and Larry Bourgeois also star. The film, set in the London bureau of the top-secret Men in Black organization, is directed by F. Gary Gray.

New Line’s launch of its “Shaft” reboot, the fifth version of the detective actioner, had been forecast for an opening in the $16 million to $24 million range at 2,952 sites for the weekend. It racked up an A CinemaScore following mostly negative reviews with a Rotten Tomatoes score of 35%. “Shaft” carries a $30 million budget and stars Jessie Usher playing John “JJ” Shaft Jr., an FBI agent and a cybersecurity expert with a degree from MIT. Samuel L. Jackson plays his estranged father and Richard Roundtree plays his grandfather, the original Shaft, as he did in the first three “Shaft” movies in the early 1970s.

Amazon’s widened release of its Mindy Kaling-Emma Thompson comedy “Late Night” also fell flat with moviegoers and is heading for $4.5 million at 2,218 venues despite positive reviews and an 80% Rotten Tomatoes score. The film was acquired by Amazon following its Sundance premiere for a record $13 million and launched in four locations last weekend with a solid $246,035. It benefits from more positive reviews, sitting at 80% on Rotten Tomatoes.

Focus saw only modest activity from its debut of Jim Jarmusch’s “The Dead Don’t Die” with $2.5 million at 613 locations. The zombie comedy, starring Bill Murray and Adam Driver, was the opening night film at the Cannes Film Festival last month. Reviews have been mixed with a 51% score on Rotten Tomatoes.

The most impressive results for the weekend came from another sequel — Universal’s second weekend of “The Secret Life of Pets 2,” declining  51% to around $23 million — and from Disney’s fourth frame of “Aladdin” with about $17.6 million. The live-action reboot of “Aladdin” should finish the weekend with approximately $264 million domestically.

A trio of holdovers were battling for fourth place at about $8 million: Fox’s second weekend of “Dark Phoenix,” Paramount’s third frame of “Rocketman” and Warner’s third weekend of “Godzilla: King of the Monsters.” “Shaft” was heading for seventh, ahead of the fifth weekend of “John Wick: Chapter 3” at $5.6 million, “Late Night” and Universal’s third weekend of “Ma.”

Year-to-date domestic box office as of June 12 has hit $4.93 billion, down 6% from the same point last year, according to Comscore. Disney-Marvel’s mega-hit “Avengers: Endgame” has accounted for 17% of that total and is pulling in $3.5 million at 1,451 sites in its eighth weekend to push its North American take to $830 million.

Disney’s launch of “Toy Story 4” should rescue the box office next weekend. Early tracking had placed the animated comedy with a debut in the $150 million range.